Why? Because they were supposed to guard the oil fields of the bombed-out territory the USA wanted to seize. Crude oil is one of the most valuable commodities on(in) the planet. A dark, gooey force of good and evil, a capitalist tool, a safe investment, a sticky liquid shaping our world, a heart of conflict, and a force capable of destroying all life. Reza Negaresteni offers a similar outlook in his ‚theory-fiction‘ book Cyclonopedia: Complicity with Anonymous Materials, which served David as a reference for the exhibition. Negaresteni comes from Iran where the fight for oil fields takes place on a daily basis and refers to oil as “the lubricant of historical and political stories.”

Following is a translation of a Czech interview David gave to City Surfer Office, a Prague gallery that originally featured his Plague exhibition.

Is your exhibition about ecology?
Certainly but not primarily, it’s a coincidence, really. When I decided to address this topic, I didn’t want to make a statement on the ecological crisis but on the wider scope of our living environment, mainly against modernity, the modern society as such, against the changes caused by the Industrial Revolution. The ecological crisis is just a symptom. I think it’s inevitable and I present it as something implicitly present in the past.

You work with an arrow, an object bearing strong symbolism..

In iconography, a golden or silver arrow is related to plague/disaster and this association is already present in the Middle Ages and sooner. For example, Apollo is a god and the symbol of the Sun, rationality, civilisation (the Nietze-based dichotomy of Apollo/Dionysus) but, at the same time, he has the ability to send plague/destruction down upon humankind and nature with his golden arrows. That’s the negative aspect of a Sun deity. All energy stored in fossil fuels, which are slowly killing us in the present, comes from the Sun. 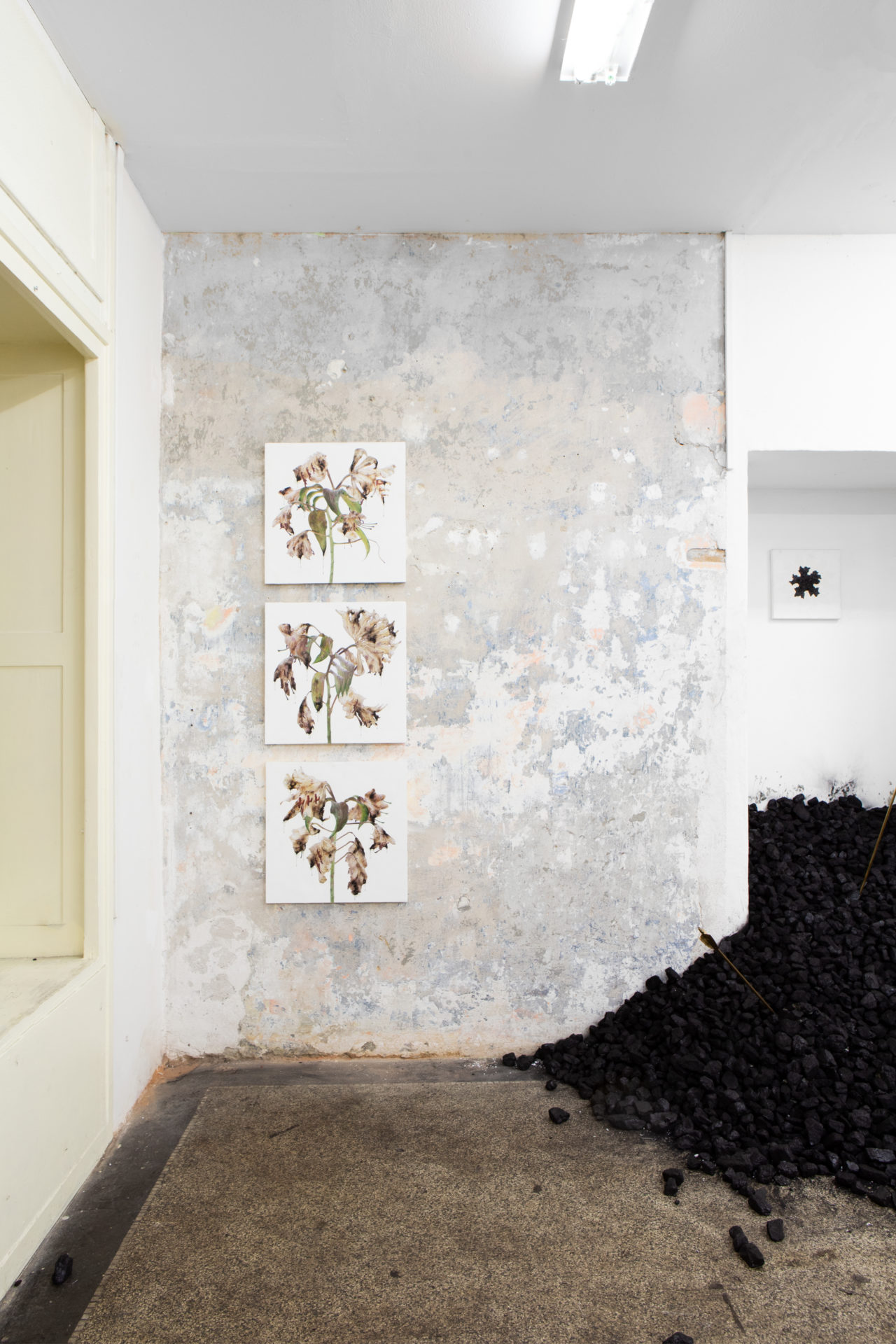 So, you could say that an arrow is a sort of a revenge symbol? Do you use it to symbolize societal critique?

No, for me, not really. I don’t want to criticize how society behaves. Rather, I try to describe what’s happening in a certain way. I don’t want the exhibition to be perceived as critical towards a particular activity. I perceive the things that are happening as a part of some process that is unstoppable and that must reach its end. I don’t think, for example, that we are able to solve the environmental crisis. It’s about us handling the crisis management. That’s the part we can influence.

Coal, crude oil, sand, rust, as Negarestani describes them, are all materials that evoke or even control some sort of “dark forces”. Are you somehow fascinated by them or do they elicit any kind of emotion?
Reza Negarestani thinks that materials can have their own historical sense of self or even their own consciousness as if they were living beings. I’m inspired by the abandonment of the anthropocentric perspective. The possibility of us being “trapped” inside self-aware processes, which we don’t understand. The Sun as an evil entity that warms up the Earth in order to assimilate it and, in the end, devour it.

For me, the most fascinating quality of oil is what I’ve learned at Unipetrol when I went there to pick it up and received a lecture on how to handle it. If you spill it in nature, at first, it has a strong fertilizing effect but anything that grows out of it is strongly toxic and then, after some time, completely dies off. Isn’t it just the perfect description of our experience with oil?

Is your exhibition a reaction to any recent events, e.g. the ecological catastrophe in Brazil where a whole coast got covered by an oil spill from an unknown source?

I don’t react to any events in particular. The medial reality is a very volatile thing for me and, in fact, I don’t even know if a person can trust it.

I won’t tell. I just think that it’s a better information source than Facebook. Basically, I try to focus only on global politics and world events or USA politics, which I find much more important in the sense of it influencing the societal discussion even here, with a delay.

Generally speaking, how do you perceive art from the ecological perspective? Do you think that the climatic crisis will somehow transform art?

I don’t think so. From this viewpoint, art is just a droplet in the sea. I think that no one cares about art anymore or rather its social influence is absolutely minimal. I have the feeling that the majority of contemporary artists only creates illustrations for thoughts that are not their own. Art now is much less emancipated compared to, e.g., modern and, more precisely, avant-garde art. Right now, we’re in a completely different position than artists were before. I think that the existing art world is much more conforming regarding it being a huge community, in which the real plurality of artistic approaches doesn’t exist. It’s a globalized field with minimal local peculiarities and the hype is measured according to how it all fits within the global scheme of contemporary art. Art is connected to power and has always served the authorities. It’s important to realize that we don’t do anything independent.

How do you perceive the climatic crisis protests and their initiator Greta Thunberg?
Definitely negatively. The role of people such as Greta Thunberg is to prepare us for a future with a gradually decreasing quality of life while maintaining the status quo. She herself says that she only tries to draw attention to the problem. But if you ask the experts for a solution, you’ll only get “don’t eat meat, don’t have kids, don’t fly”. We’ll eat bugs and own nothing. We should never accept such things.

We should want the solution for a problem that’s somewhere behind all this and that problem is the economic system. I don’t use the word capitalism on purpose because capitalism is a fairly empty term for me – it means different things to different people. The problem is a specific kind of a financial system that we now have and the people that profit from it… the international bankers, a sect that never sleeps.

Of course, I’m not an economist and I don’t have the know-how to talk about this in-depth but I’m sure things could be entirely different. Money could work differently, etc. In a certain sense, the world isn’t dying but is killed and the people killing it have names and addresses.

What will you do with the coal and oil from this exhibition?

Regarding the coal, I have a deal with the place I got it at that I’ll be bringing it back and they’ll buy it back for half the price. As for the oil, I plan on keep using it. It’s great for painting. But, legally, I can only get rid of it by taking it to a waste collection point, which will dispose of it.