An essay on the boundaries and etymology of domestic space written by Jonas Vansteenkiste.
words
Heritage

One of the first drawings I remember is that of a white house, a free-standing house in a green meadow. The house was rather symmetrical, with two windows and a door in the middle, smoke coming out of the chimney.

I can’t remember if there was a tree next to it or if the sky was blue or if I drew the sun in one of the corners.

The strangest thing about it was that we didn’t live in a free-standing white house nor a house that was symmetrical. Somehow, this archetypal house form found its way into my head. But where did it come from? And how did it infiltrate my head?

In a television series “The Perfect Home”, Alain de Botton explored the importance of household architecture. He offered criticism on house development. He showed us that a lot of houses today are built in an idealized fake heritage style, which he referred to as  “a pastiche”. This so-called pastiche is a common denominator of houses property developers introduce to us as an ideal way of living.

They manufacture “the model home”, a perfect image of today’s living standards, and copy-paste it but they miss their goal if we want to approach the essential objective of a home. Sure, these houses shelter us from nature and provide us with privacy but are these houses built to be our homes? Is home not more than four walls and a roof ?

The house as a second skin

The idea of a second skin is not so far-fetched. We are always looking for a place or space to be a “buffer zone”, a cocoon, a place that offers us protection.

When we are born, we have the preconception that we are one with everything around us. This means that babies cannot distinguish between themselves and the world around. A child is extremely sensitive to external stimuli and influences that have a direct effect on their development. Some of these stimuli are internalized and form the basis of the personality. Often the individual realizes their consciousness in what Lacan calls the mirror stage. This realization is accompanied by an oversupply of external stimuli as the child loses the feeling of oneness with the mother. Until now, the child thought that the mother and the child were one (symbiosis).

The individual responds to this “mental divorce” by shielding themselves from external stimuli and influences and continues to search the aforementioned buffer zones. These buffer zones filter the excess stimuli and may take the form of objects or spaces.

At such an early stage of life, it is important for the baby to feel boundaries. These limits should be taught: the embrace of the mother and child hugging or being wrapped in blankets in order to have a contour experience. This way, the baby feels own skin and experiences own limits. A limitation is crucial for the development of an individual.

Boundaries are required to create their own interior and, from there, go to the exterior (reality). This way, the individual can place themselves outside of reality as such and also take a position in this exterior. The child is thus self-aware and distinguishes oneself from things around them. 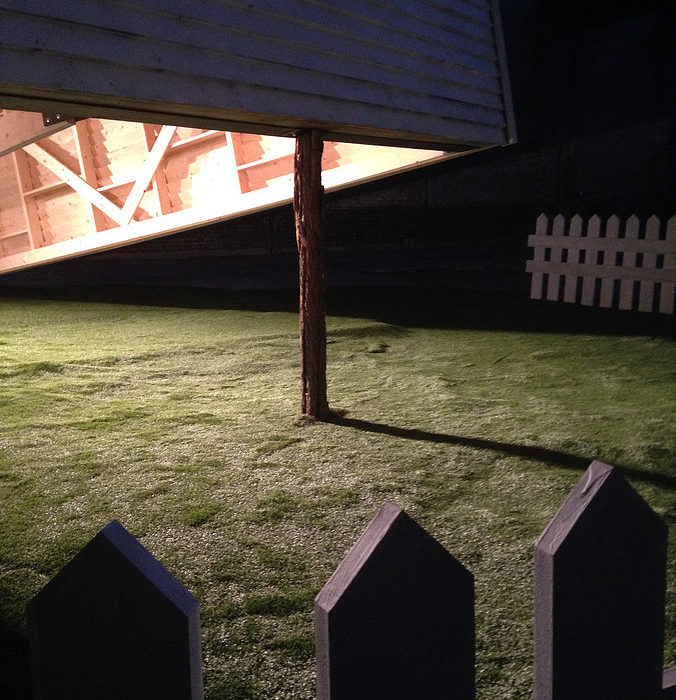 Even if we look at the etymology of the Dutch word for house, “huis”, we can trace it back to the old German word “hutte”, which relates to old living premises, something between a wooden construction and a tent. The walls were made of animal skins and the name “hutte” means skin as well.

Even if the meaning of a house as a second skin has changed from a shelter to a more psychological meaning, the basic idea of protection still lingers. The treatment seems to have changed. Physical protection has traded places with more of a mental one and became a kind of a personal heterotopic place in society, shielding us from reality.

That reality threatens the dreams we have.

Gaston Bachelard thinks of the house as a shelter for day-dreaming, the function of such house is the protection of the dreamer.

These images of a house that is the perfect shelter, where we can live in peace in our bubble, would be flat and wrong presumptions. I think that the house and its owners are in a permanent state of crisis. You have to see this crisis as a state of being and not as a problem. 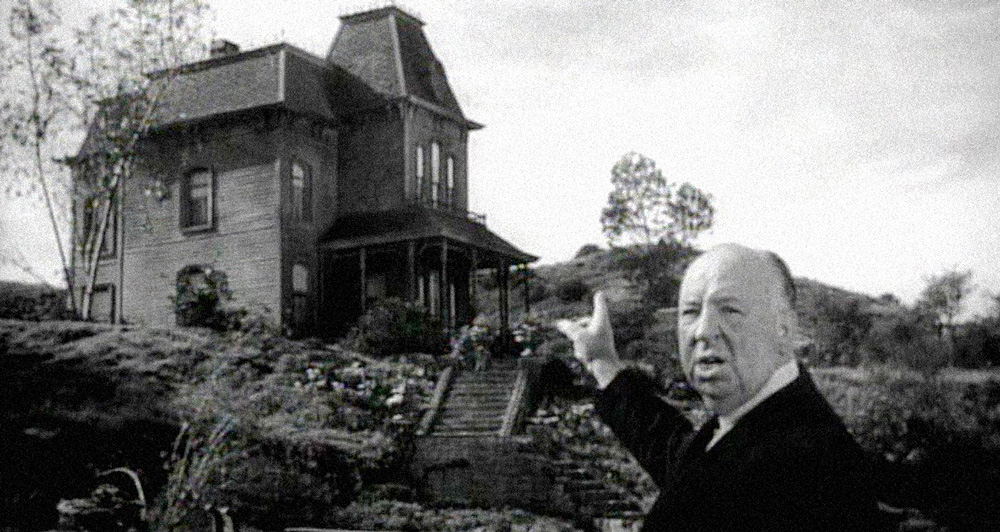 An interesting theory (and an example of crisis) is the suggestion by Slavoj Zizek that the mother’s house in the Alfred Hitchcock’s movie Psycho would be a blueprint of the human psyche – that all levels of the house can be related to a part of the human mind.

The ground floor would be contextualized as the “ego” (where the childhood bedroom is), the first floor would be the place of the “superego” (where the mother’s room is), and the basement would be the place where the “id” dwells (where the corpse of the mother is hidden). In the theories, Sigmund Freud utilizes the uber-ich, also called the superego, as a censoring force concerning the id. It arises through the identification process with the sanctioning (punishing and rewarding) parents.

Zizek also nicely shows the bonds among the id, the ego and the superego and points to the mother being carried down from the 1st floor to the basement. To him, this action showcases the connections between the three parts of consciousness.

If we continue to follow Zizek’s argument, we note that in the “Psycho” motel that Norman Bates operates is at the same basement level of the Victorian house. This is true because it is a place where the mother and the son are clearly split. The motel is also the only place in the story that belongs to him.

If we look at his bedroom at his parents’ house, we see that it has not changed since childhood. Therefore It can be argued that a subservient Norman’s notion is in this house. Everything here refers to the mother, even if she’s deceased, her presence dominates the house. One way or another, the symbiosis remains between the child and the mother, even after the death of the continued existence of Norman’s mother. The fact is that for Norman, a “mom personality” has developed after the death of the mother. The house, in turn, plays the role of physical reference in maintaining the mother’s figure, indicating the identification of the mother with the Victorian house.

We also see a clear separation of his persona at the basement level. On this floor, two people can never be seen together, we see the mother only appearing as a murder victim and as a voice from the house on the slope.

The setting of the story is – much like the character of Norman Bates  – clearly split. One location, two buildings, two distinctly different architectural styles from different periods. In a healthy relationship, the figurative umbilical cord must be cut but in the figure of Norman Bates, this cord has not disappeared, creating a split personality identification resulting in a child/mother individual.

If the identification is not strong enough, it can result in an uncanny feeling: you’re a stranger in your own house.

When the writer Georges Perec stood before the house where he’d once lived as a child, he responded with just one sentence, “Je ne suis pas rentré,” which means, “I did not go inside.” These five simple words condense into a tragic weight in meaning: “I have not come home”.

Perhaps the ideal image of a home sets the boundary of the domestic space. But didn’t we need boundaries to explore the world and to become ourselves? In this way, the house has evolved from a practical space to a mental space where we share personal but also universal experiences.

And maybe we are doomed to dwell between the desire to come home and the idea we can never come home.

Jacques Marie Émile Lacan (13 April 1901 – 9 September 1981), known simply as Jacques Lacan, was a French psychoanalyst and psychiatrist who has been called “the most controversial” psycho-analyst since Freud.

MaartenJan Hoekstra: author of the book Huis, tuin en keuken. Wonen in woorden door de eeuwen heen, “House, the Garden and the Kitchen. Living in Words Through the Centuries”

Foucault uses the term heterotopia to describe spaces that have more layers of meaning or relationships to other places than immediately meet the eye. In general, a heterotopia is a physical representation or approximation of a utopia, or a parallel space (such as a prison) that contains undesirable bodies to make a real utopian space possible.

Gaston Bachelard (27 June 1884 – 16 October 1962) was a French philosopher. He made contributions in the fields of poetics and the philosophy of science.

Slavoj Žižek (born 21 March 1949) is a Slovenian philosopher, cultural critic, and Marxist intellectual. His work is located at the intersection of a range of disciplines, including continental philosophy, political theory, cultural studies, psychoanalysis, film criticism, and theology.

Sigmund Freud (6 May 1856 – 23 September 1939) was an Austrian neurologist, now known as the father of psychoanalysis.

Georges Perec (March 7, 1936 in Paris – March 3, 1982 in Ivry-sur-Seine) was a French novelist, filmmaker, documentarian and essayist. He was a member of the Oulipo group. His father died as a soldier early in the Second World War and his mother was killed in the Holocaust, and many of his works deal with absence, loss, and identity, often through word play. 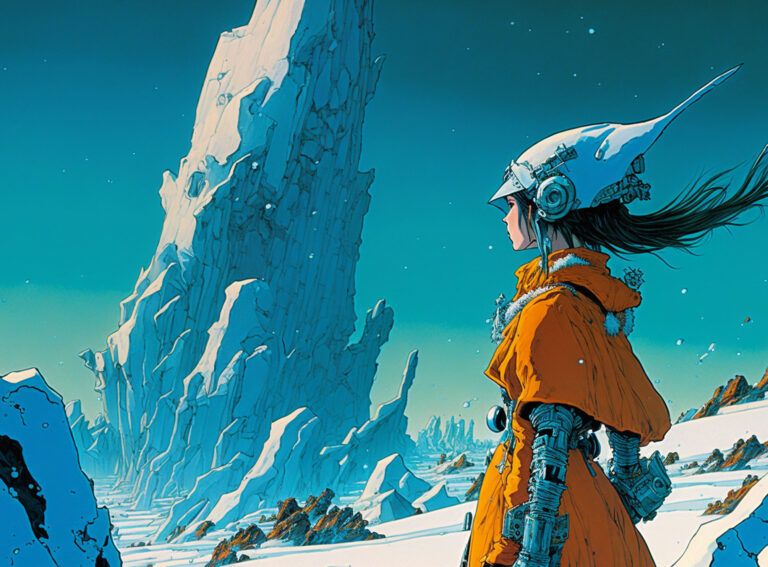 Custom-written for our current theme FULL OF DESIRE, Czech author Zuzana Trachtová presents a string of associative vignettes offering a glimpse into a heart-rending and organic trudge through a body and mind ravaged by heartbreak. Accompanied by illustrations by Eva Maceková. HE'S A DRUG, I'M A WITCH
wordsillustration
FULL OF DESIRE
Read more 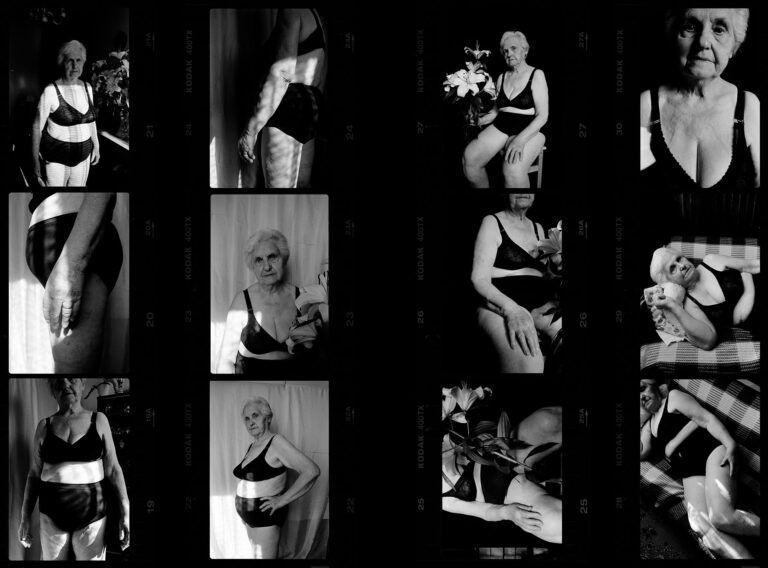 Polish artist Marta Karkosa uses the medium of photography to explore contemporary women’s attitudes to their own bodies, promoting the beauty and uniqueness of every corporeal form. In today’s exclusive interview, Marta goes in-depth into her book Women Body Acceptance, which intimately explores these themes across several generations of women living in a strongly conservative nation-state.
wordsphotography
FULL OF DESIRE
Read more

Dangling over the chasm of jealousy, basking in the burning flames of scorn, sneering down at love from an intoxicating cloud, there lives Desire. Our third theme of 2022, FULL OF DESIRE, takes flight now – and no one is safe for the next three months.
wordsvideo
FULL OF DESIRE