WORDS BY THE ARTIST / My approach to the theme of this issue and using and re-purposing is the way I use other visual imageries and symbols from mythology and various cultures and re-appropriate them. I have a deep interest in the artwork of other cultures, from which I like to borrow aesthetic elements and recombine and incorporate these in my own style. I am captivated by the history of art, and my imagery is influenced by various works of art and mythological corpus, from the Flemish Renaissance to German Expressionism to the works of the Chapman brothers today. I like to take inspiration from those traditional compositions of visual narrative to create my own chimeric worlds and characters. The subject matters that interest me may often be dark but I always try to approach it with a personal brand of humour hinting at the sexual and the absurd.

Nature is a great source of inspiration in my work, for its intrinsic symbolic and ‘escapist’ qualities and I often incorporate elements of the natural world in my work.

I often use it on opposition with something darker, as the contrast between beautiful and unpleasant is something I find very fascinating and that I enjoy playing with in my work. I would oppose, let’s say, something considered conventionally beautiful like flowers, against something dark or “ugly” like death or decaying flesh in order to arouse fear and create pleasure at the same time and create an ambiguous dissonance. I also like to re-appropriate old ancient myths like Greek and Roman myths with a feminist approach in order to shift the focus of the stories and re-appropriate representations of the female body.

Art history has seen the female nude as one of the most depicted subjects ever. The representations are always touching and full of beauty but yet very prejudicial.

Women are represented either as evil, fallen woman, temptresses, lustful nymphs or virginal, angelic and pure. A lot of paintings contain representations of sexual assault, rape, and portrayals of women as victims. We could even argue that classical art used near pornographic images under the guise of religious or mythological subject, and usually made by men and rarely from a woman’s perspective. My intention is to tell those stories from my point of view as a woman. 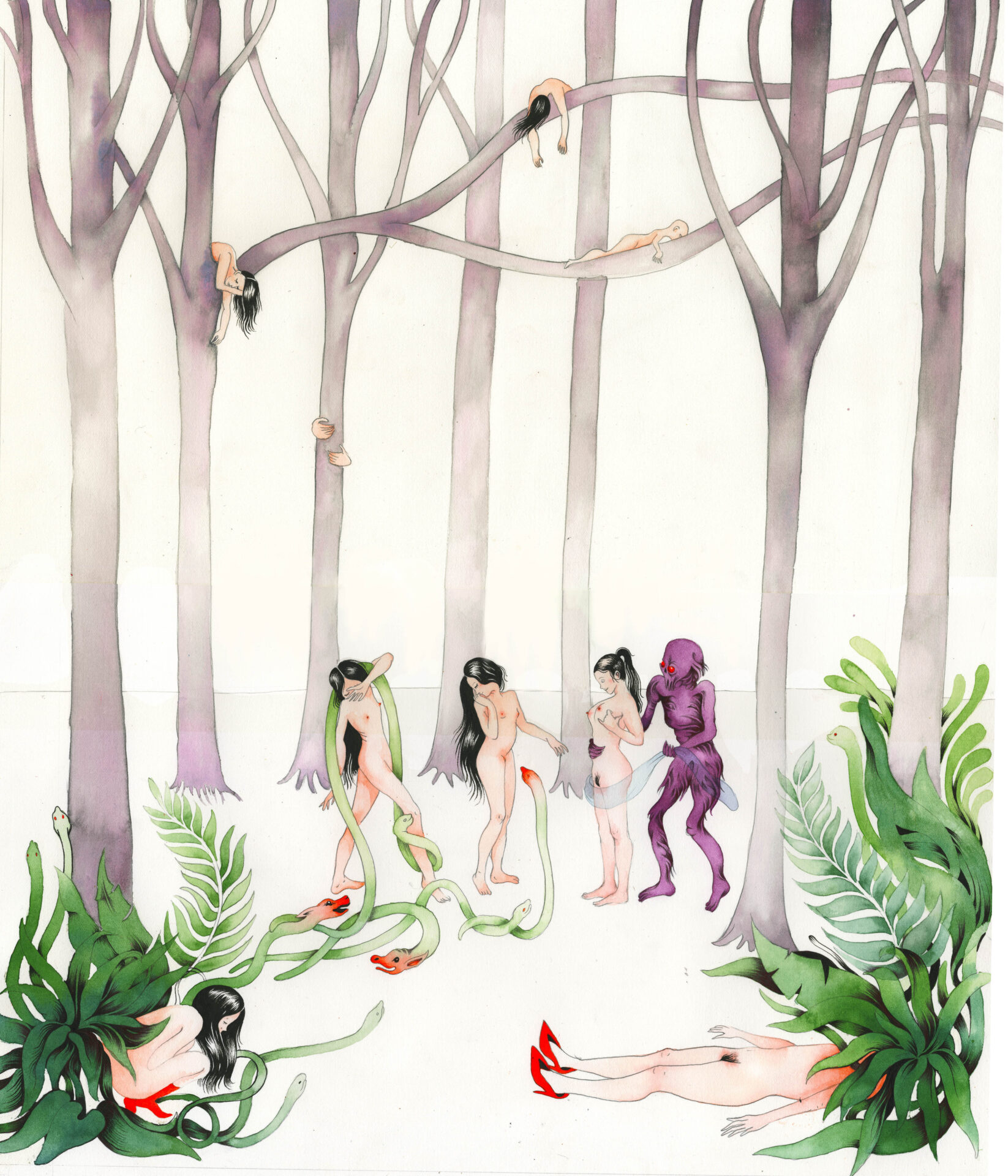 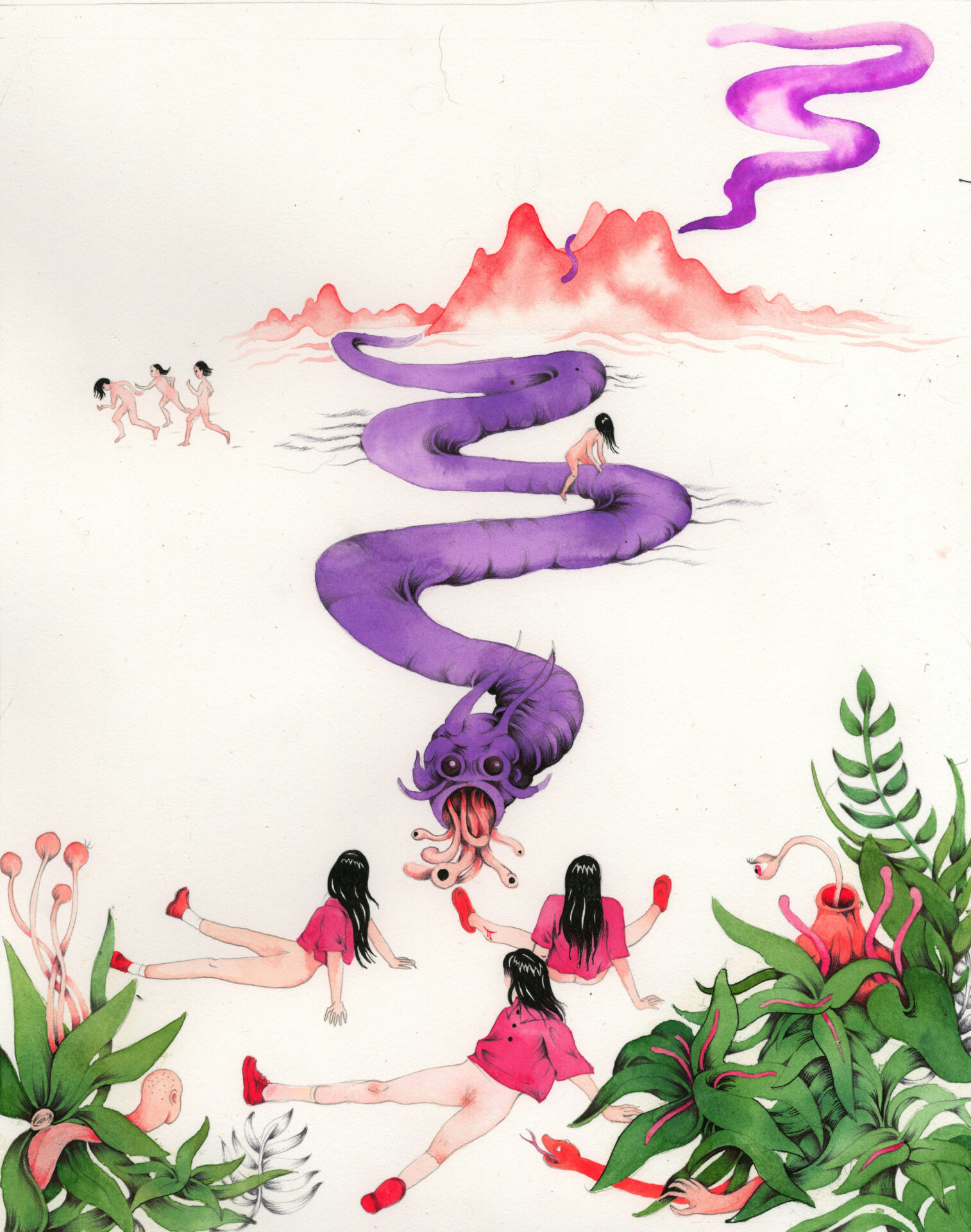 The stories I tell carry memories, or they fantasize about my memories. They are often focusing on perversion of innocence and sexual awakening. Telling many multiple stories within the story obsesses me; I want to engage the audience in actions of looking, deciphering, interrogating. I like to create enigmatic pictures by adding contradicting elements and figures and using various symbols from different imageries that cannot be grasped with only one single glance, but rather need multiple readings, allowing the viewer to experience a sense of strangeness and that provokes them into questioning their own interpretations.

I try to approach subject matters that I feel strong about, whether it’s violence towards women, the complexity of female identity and contemporary anxieties linked to the representation of gender.

The characters of my drawings are mainly girls and usually in the phase between childhood, and adult stage which I find is the most founding and richest time, as we come across for the first time with many questions and interrogations, about our sense of self, sexuality, identity. Creating these bizarre new scenarios with these young girls is my way to investigate my own neuroses, channelling my own anxieties about body image and mental health and making plausible explanations with absurd situations. I usually use them in compositions of gatherings in order to capture all its intricacies, the innocence and sweetness but also the unsuspected force of the collective.

The school uniform is more used as a metaphor. It represents authority and constraint and societal dictates imposed on women that forcibly create an ideal of femininity… They sort of represent a cage but also act as a structure for the individual to have a sense of belonging and evolve in society.

I paint mainly with watercolour, usually to fill in the shapes, and then work on top of that with various pens and pencils. I like both sensations those mediums provide and to play with them. Regarding drawing as a specific medium, I identified very early on that I feel it is the perfect tool of expression and analysis for myself. I use it to not only to produce an image but, hopefully, to act as a stimulus enabling the representation of the unseen and memories, both real and imagined. The directness of the process of drawing can also be seen as ‘mental unravelling’ in itself and I think this is an important aspect when dealing with visceral, fantastical and sometimes challenging imagery. I rarely work in digital, I enjoy the process of working with materials way too much, the colours, smells , textures, and even the unexpected mistakes of this medium – that is something you will never be to obtain and recreate with graphic tablets.

BIO / Amélie Barnathan is a French illustrator living in London whose body of work spans illustration, fine art and printmaking. The foundation for her work stems from her obsessive relationship with drawing, particularly for its intimacy and very direct relationship with the mind, ultimately aiming to re-evaluate the importance and meaning of this medium within the rapid visual culture afforded to us by the digital age. She likes to draw hugely expressive and complicated pictures and creates intricate visuals with a strong sense of narrative, inspired by many sources such as the sublime and the grotesque.

Her drawings are inspired by the ritualistic qualities of ceremony and myth. Often using the image of the child as a central theme, she constructs ambiguous scenes depicting characters taking part in a nonsensical world. Her work navigates through identity and sexuality, she aims to investigate the nuances of the female collective and the pressures of conforming in social environments, its common psyche set in adolescence. This is represented using visual imagery borrowed from mythology and personal fantasies. Amélie’s drawings traverse the historical to mythical through dreams and nightmares. She is invested in creating new, alternative and absurd universes, fuelled by historical and contemporary references through personal fantasies and desires. Ultimately her work aims to articulate tensions and contemporary anxieties particularly connected to representations of genders. 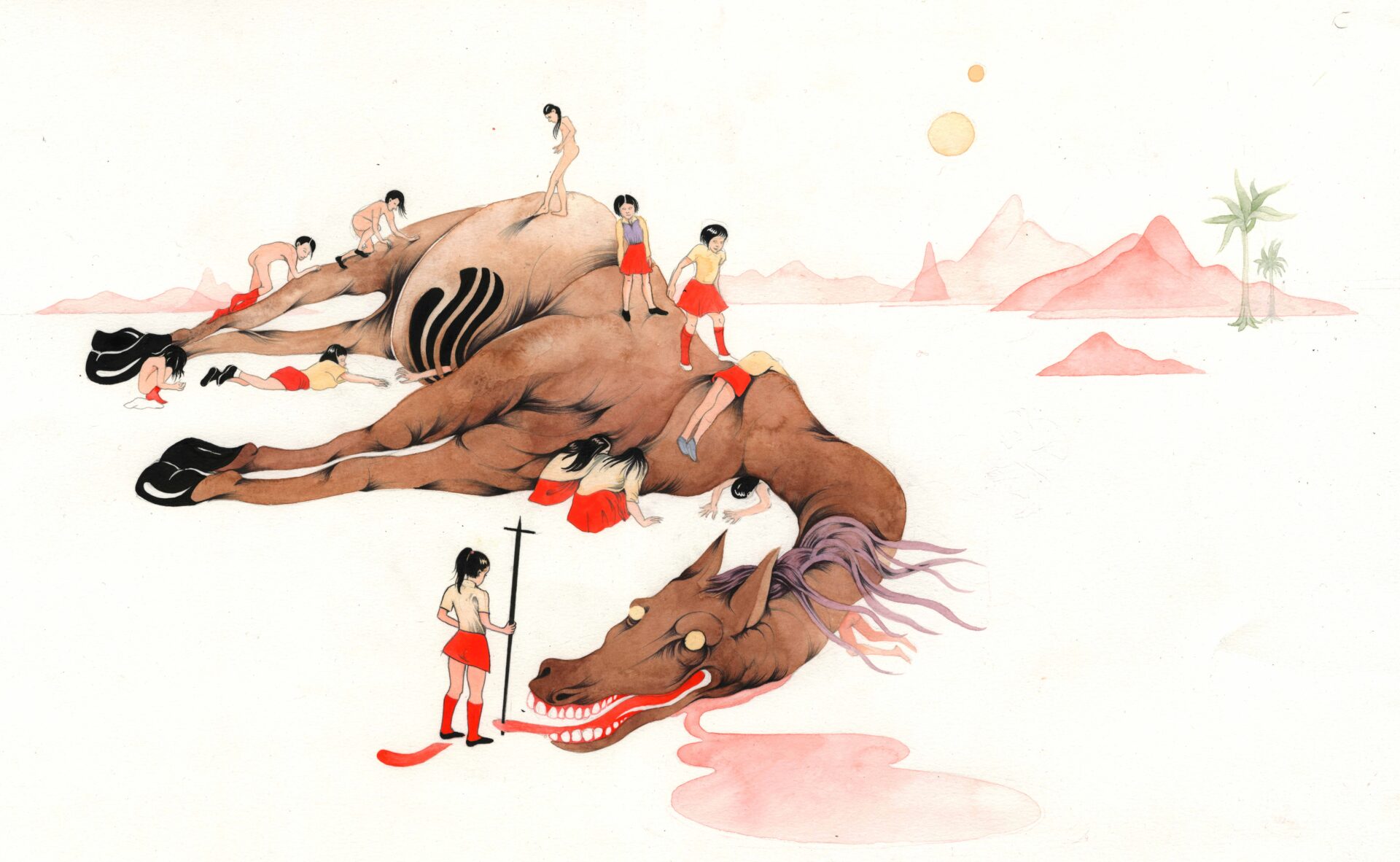 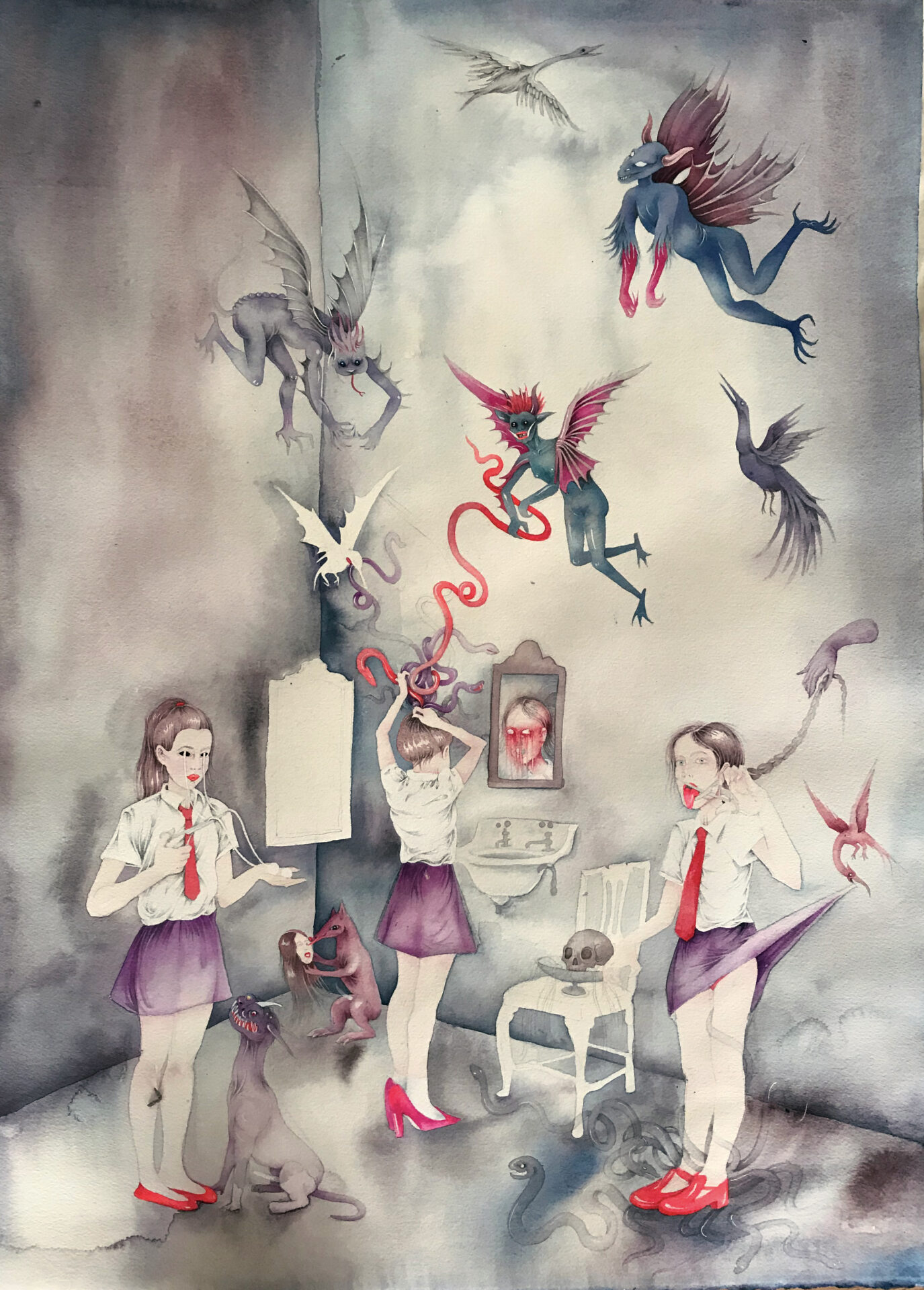 After studying illustration at London College of Communication, Amélie continued to complete a master’s at The Royal College of Art in visual communication. Throughout this period her work has been exhibited in numerous shows in both London and Paris; a highlight of which being the receipt the student award at the 2017 Jerwood Drawing Prize, which culminates with a touring exhibition of all nominated artists across selected English galleries over a 5-month period. She is preparing her second solo show in Paris this coming autumn.