Aposematism in animals – bright, patterned colouration – exists to warn off predators. But colour plays a vastly different, nearly opposite role in the collections by Slovak fashion designer Dominika Kozáková. Playful, crustacean- or bunny-like elements emerge in elaborate and soft headwear, which invites us to hug and snuggle. Interview with the designer follows below.
interviewfashion
WHO LET THE DOGS OUT

The Motherland collection is heavily inspired by childhood and colourful memories from it, specifically by the garments knitted by Dominika’s grandmother with the use of wool from her own pet sheep. The collection is made in this spirit, garments are handknitted from natural materials or made from upcycled deadstock fabrics, making its production less harmful for the planet. 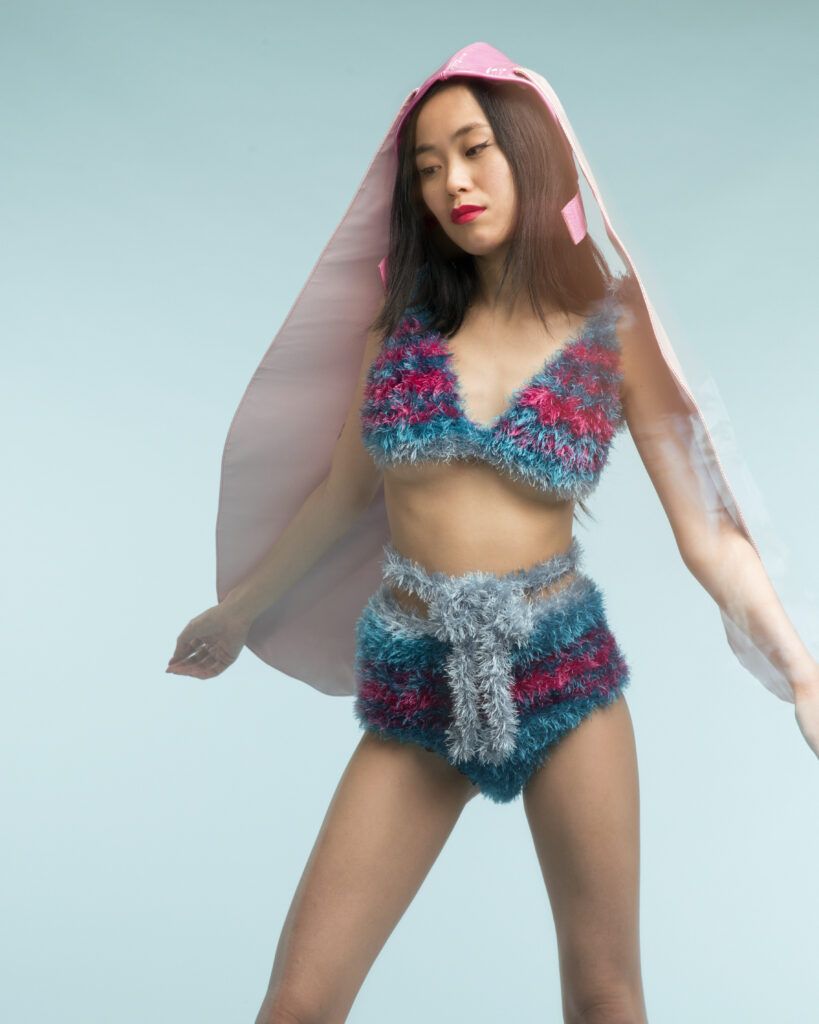 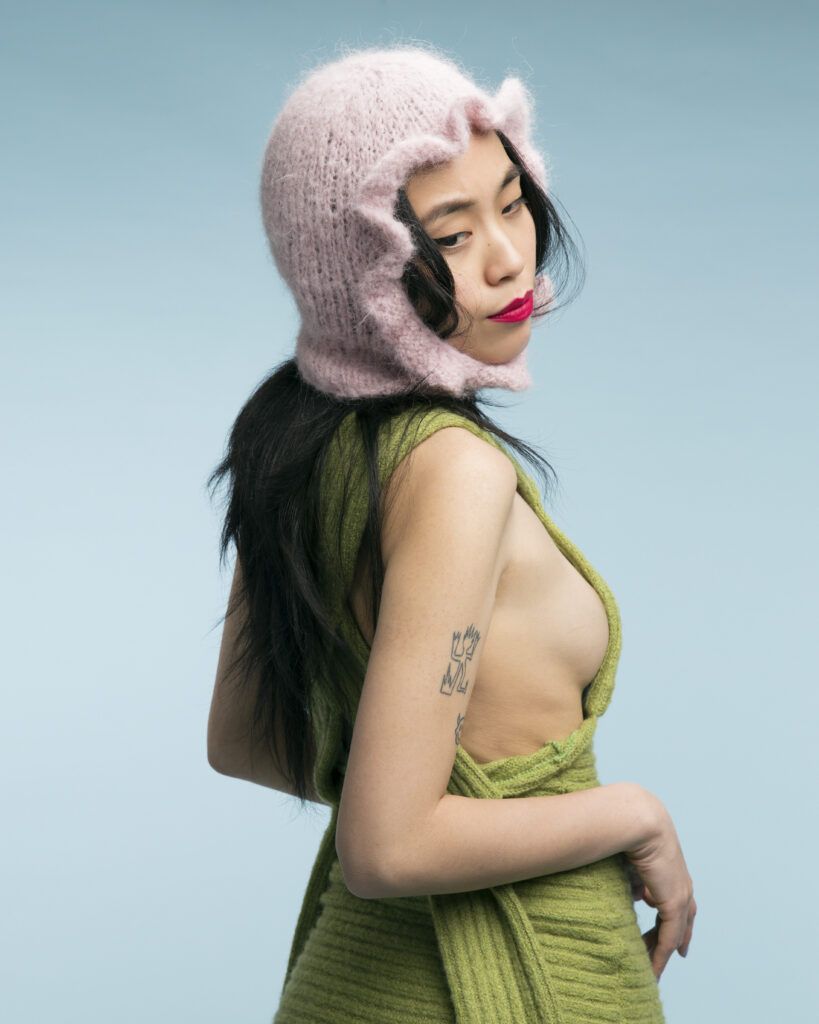 Your aesthetic is loud, extravagant, dreamy and covered in glitter. Where did you get such courage and drive from?

The pieces come from my inner world, they are collages of my feelings, experiences and adventurous friendships. They are full of magic and enchantments.

What is the founding message of your brand?

The brand’s message is about putting personality into the pieces, sustainability, local labour and creating with quality materials. 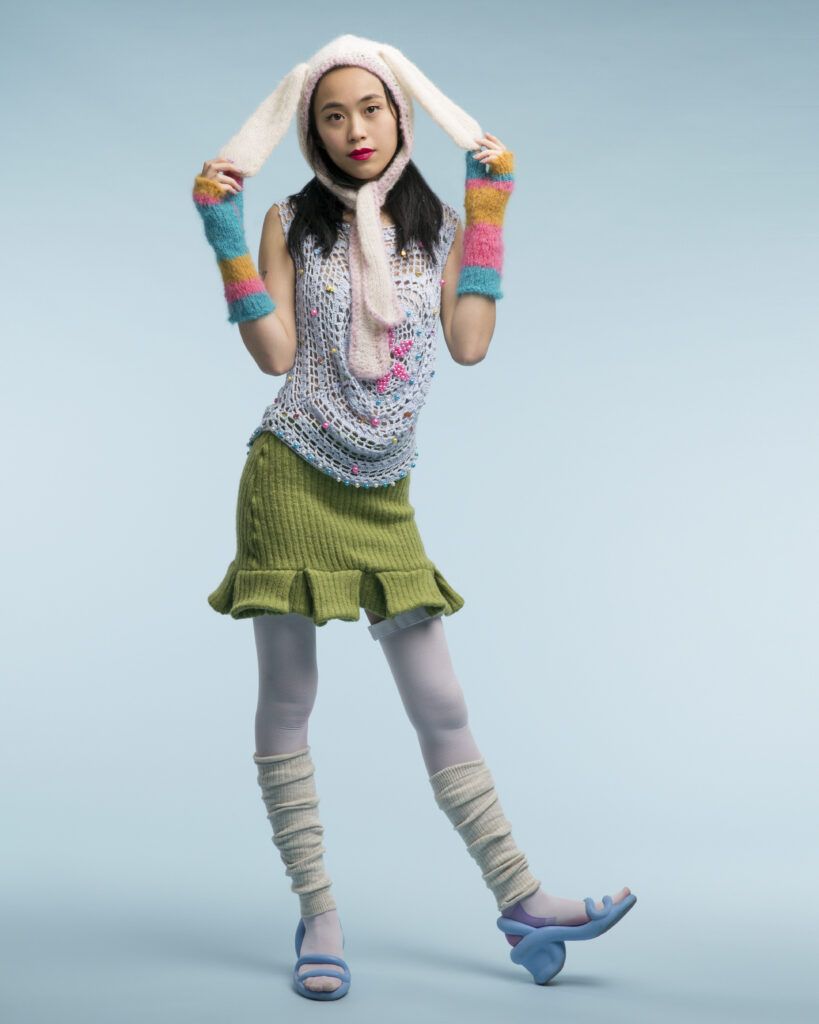 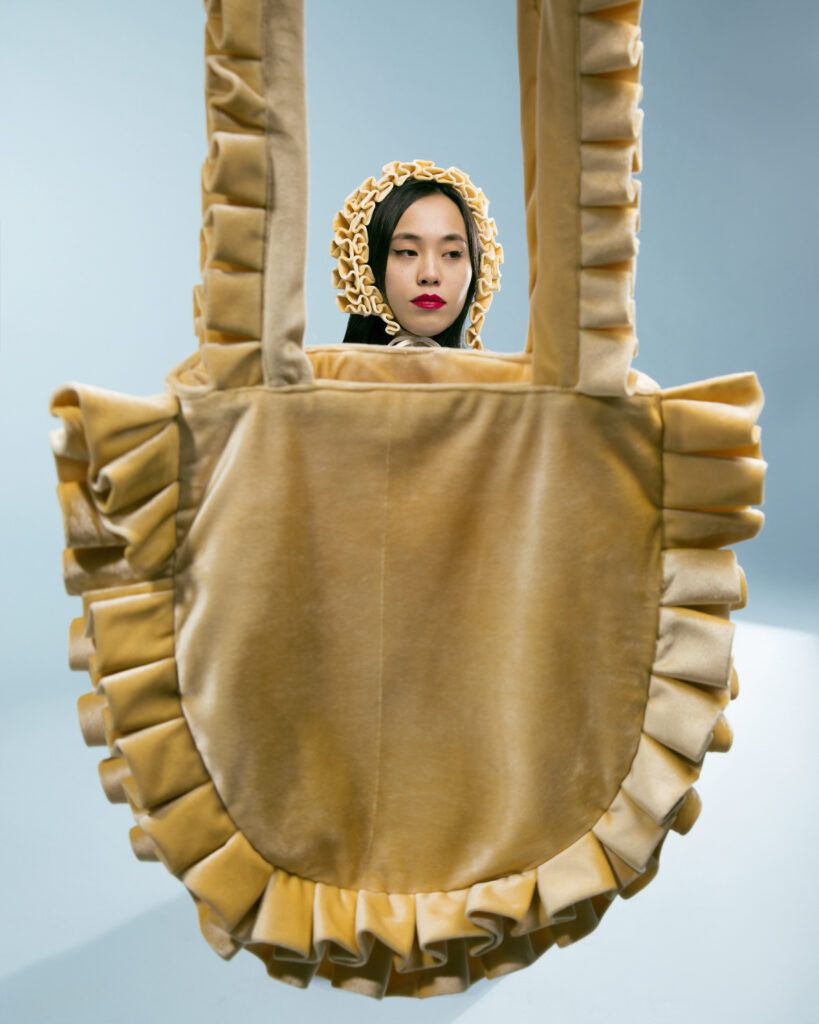 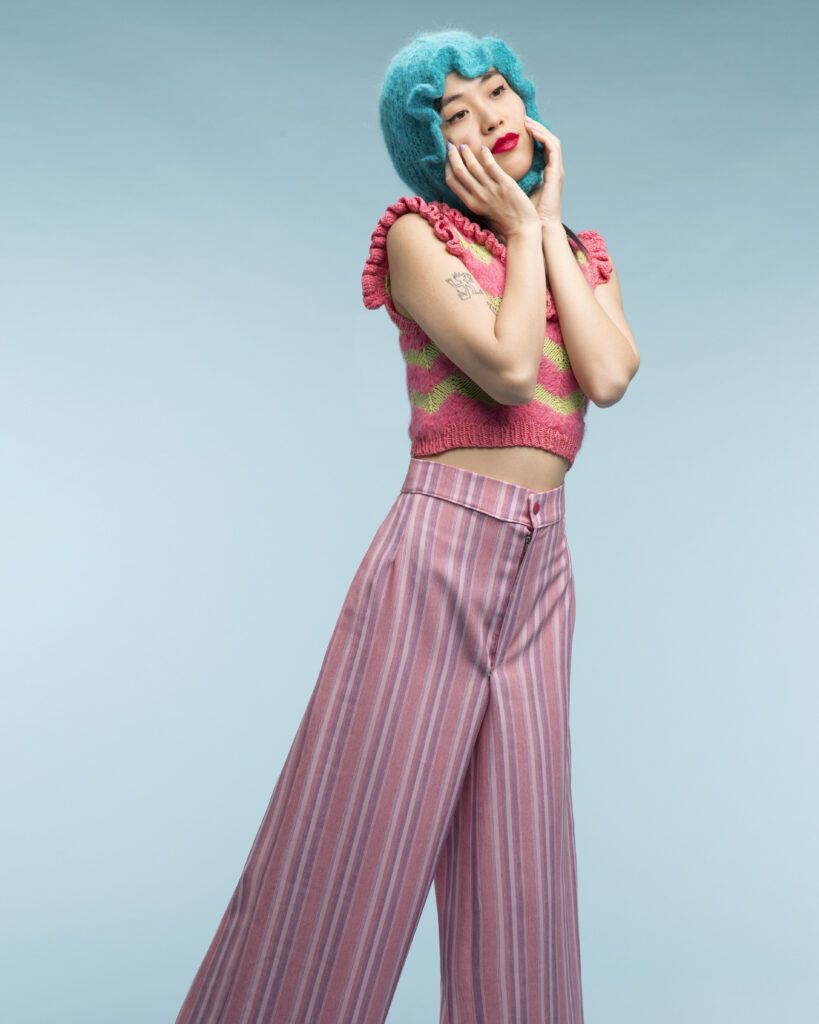 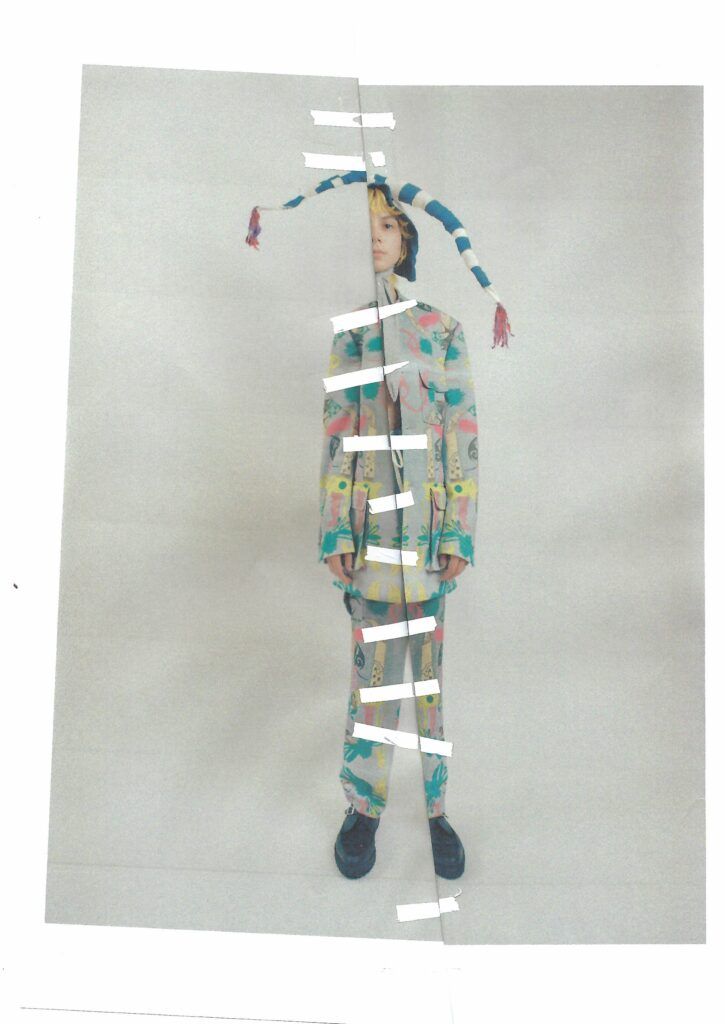 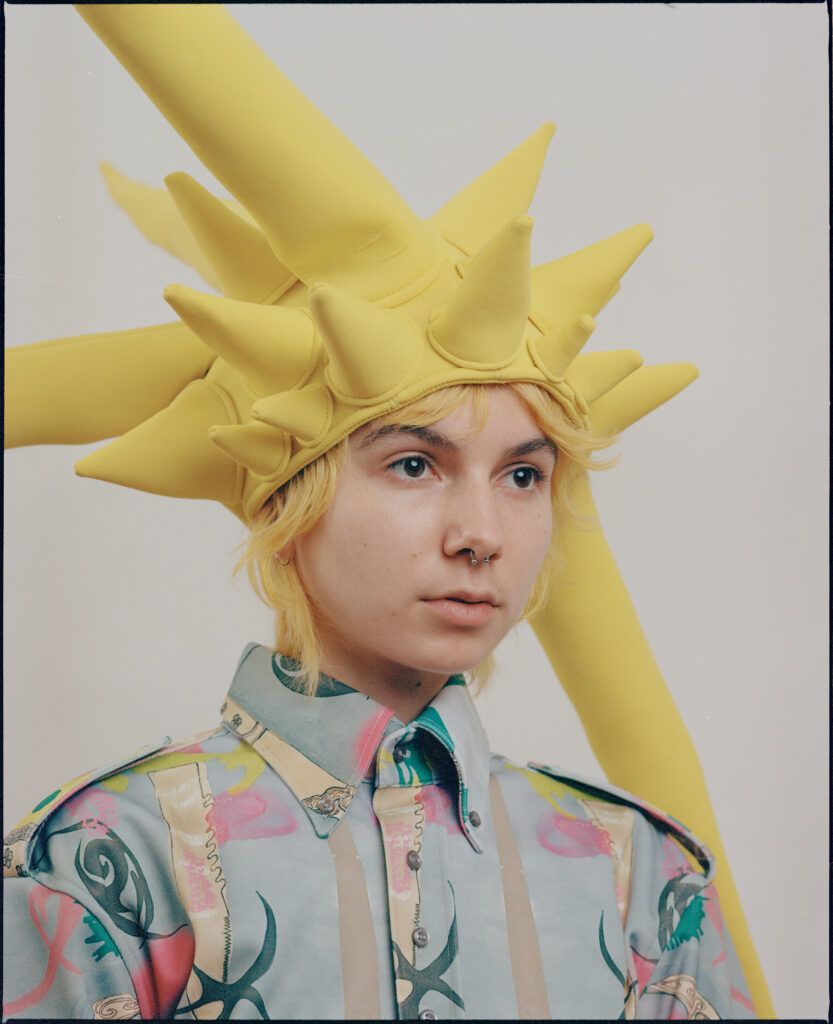 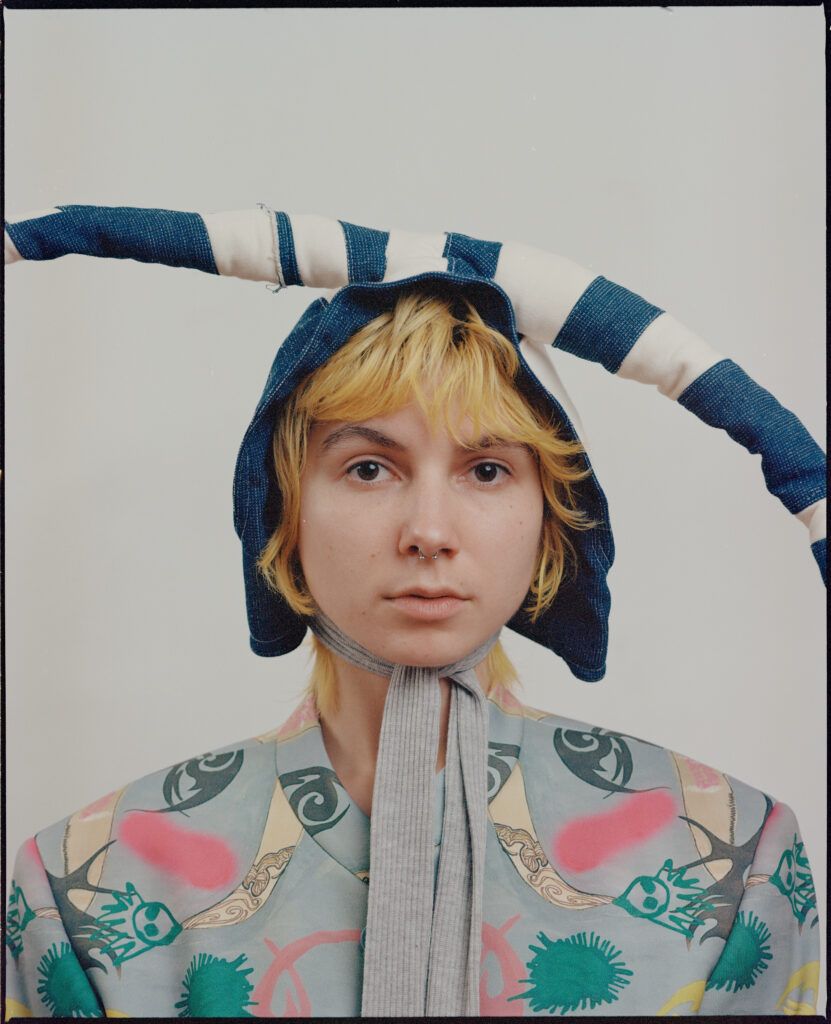 Would you tell us a bit about your aesthetic influences?

The inspirations are based on specific personal experiences from childhood, on sincere childhood innocence and carefreeness. Inspiration also flows from pop culture and circuses. I am inspired by the combination of colours, shapes and textures from natural scenes, overall by nature and creatures such as insects, butterflies, and flowers. 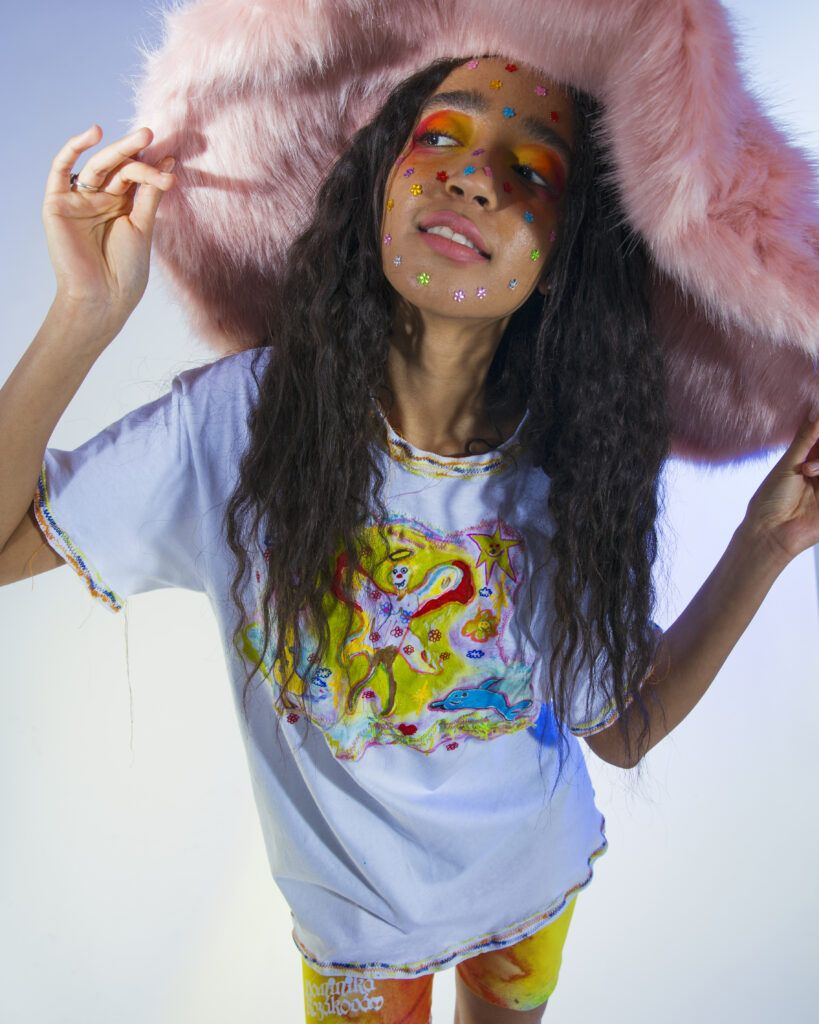 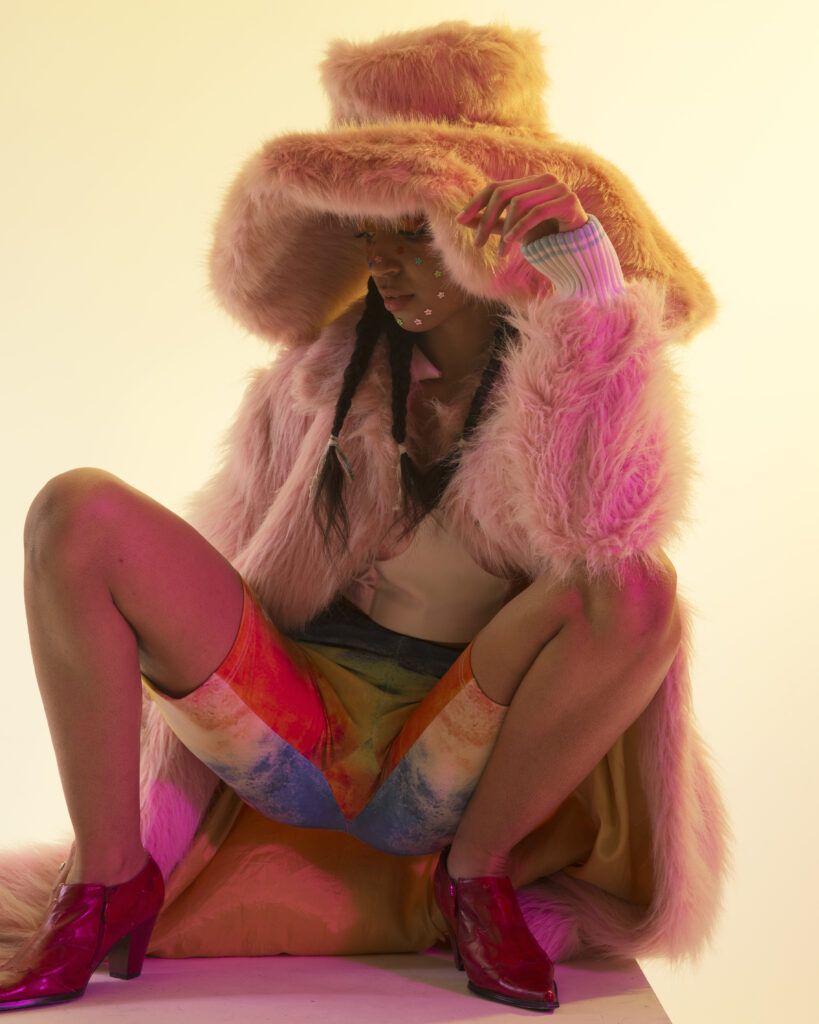 The collection named The Feast was inspired by the village life and the natural elements surrounding it. Gardens with working tools, flowers, plants and butterflies are all visual aspects continually repeating themselves in it. Fabrics used were deadstock, embellished by patterns, collages and coloured by natural dyes. Another important elements are plaster pieces and works of body-art, which physically draw us into Dominika’s world of inspiration. 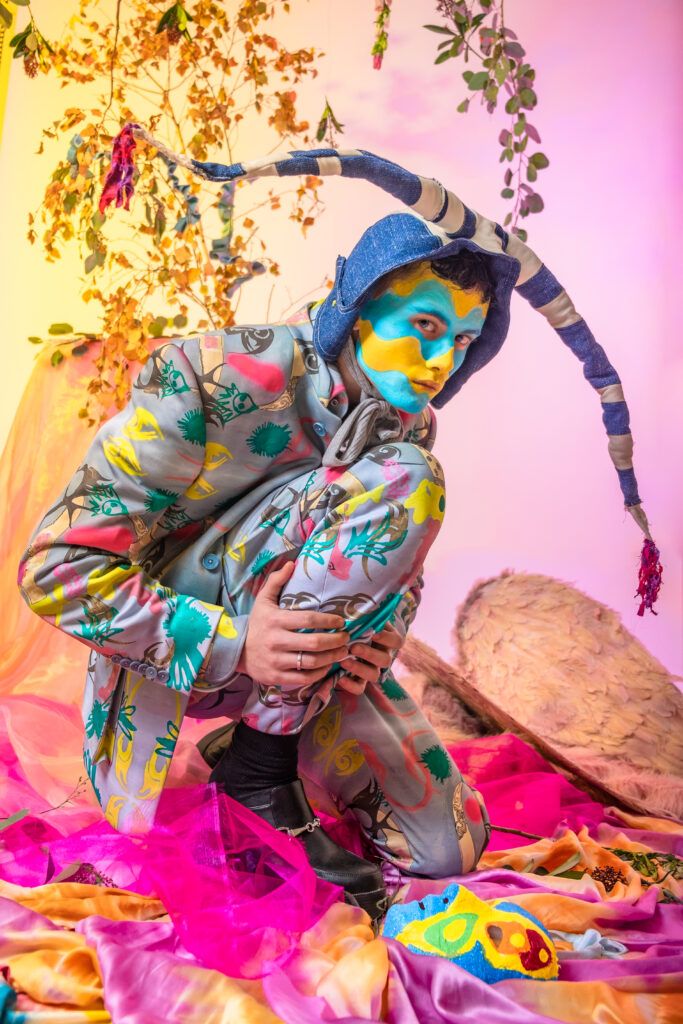 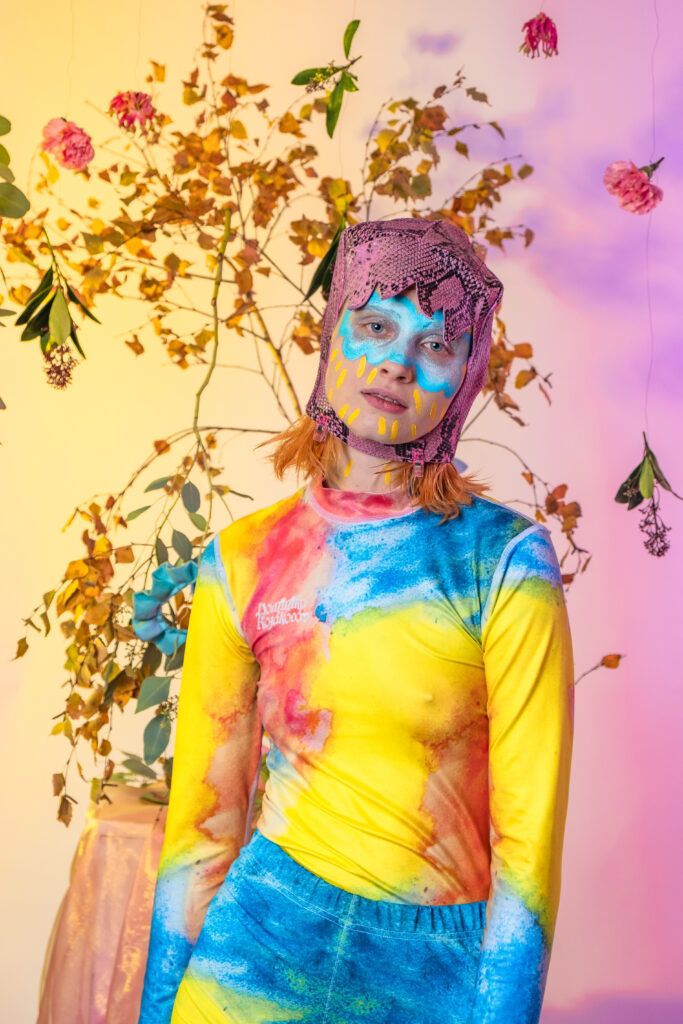 The last question, as per our current theme: do you have a soulmate animal?

I think there is more than one magical animal that I identify with, they keep changing. At the moment, I first thought of the worker bee but then I realized that the bee works for her queen. That’s why I will say I am a spider who knits and creates her own web, like when I go to the studio where I sew and knit my webs and collections. 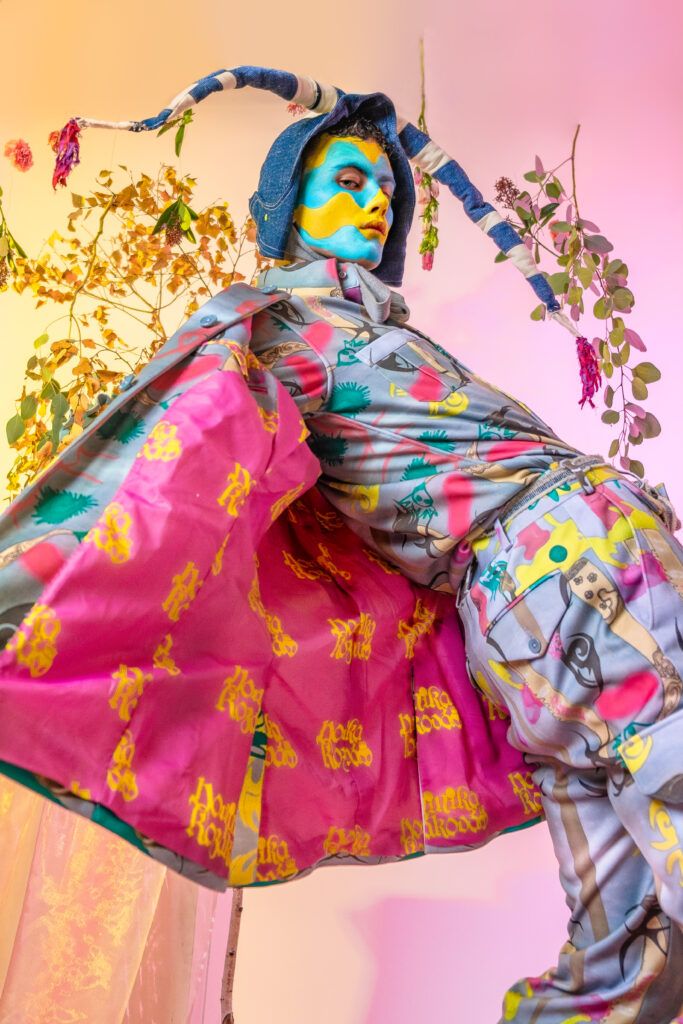 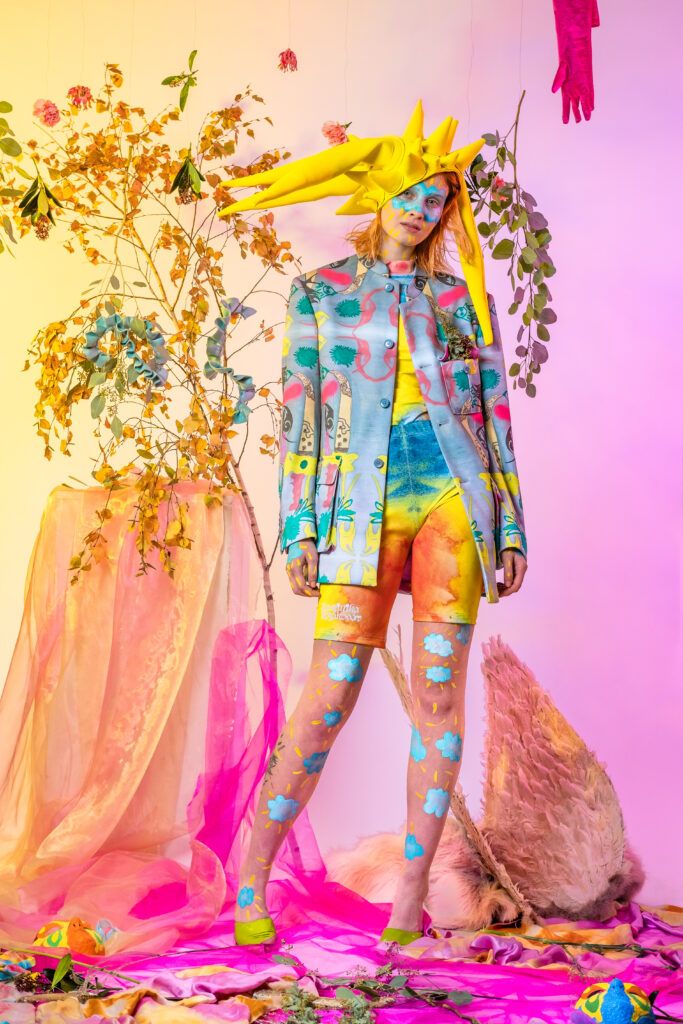 Dominika Kozáková is a Slovak fashion designer who makes collages full of adventurous friendships with a magical touch. Her works are a form of self-expression of her dreams, conflicts and beliefs. Her fashion shows are celebrations of life.

In 2021, Kozáková also provided costumes and styling for the fashion film “Somebody” directed by American Jordan Blady. The film premiered in the i-D magazine and was awarded in the costume and styling category at the Berlin Commercial Film Festival.

Famous magazines like Vogue Italia, i-D, Fucking Young, Kaltblut, and Dianne Pernet’s blog ASVOF have written about her work and contributions to the fashion world. Dominika’s clothes are worn by celebrities like Sita Abellan and Shy Girl, Kelsey Lu.

Fashion, make up by designer @dominikakozakova__

In seeking to infuse the jewellery industry with eco-friendly values, Movement – Arts – Mission (MAM) lead the way by example in their collections. Having received their sustainability certification earlier this year, they now spread their mission further through their cutting-edge and futuristic craftsmanship from 100% recycled metals. In today’s interview you will get to explore the brand’s design philosophy and adornments.
interviewfashion
FAMILY BUSINESS
Read more

Working with the rich resources of family and folklore, Silvia Leitmannová’s collection traces several generations of women in her family to explore not only the history of fashion, but also her familial roots in western Slovakia. In today’s interview, you will get to explore the author’s delicate narrative for the project, her plans for the future, and the meaning of Schena Maaro in the Kľačno dialect.
interviewfashion
FAMILY BUSINESS
Read more 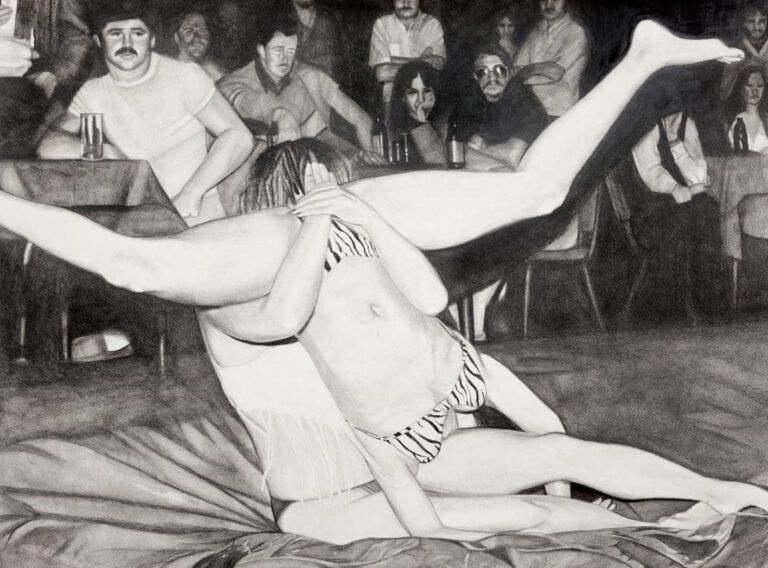 THE WOMEN YOU KNOW

Erica Eyres explores in her artworks the vulnerability of nudity and uncomfortable familiarity. Drawing from inspirations spanning old magazines and grocery store objects, the Glasgow-based Canadian artist then creates open-ended pieces that invite the spectator to create their own narrative. Read today’s interview to learn about Erica’s creative approach and her recent turn to ceramics.
interviewart
FAMILY BUSINESS
Read more 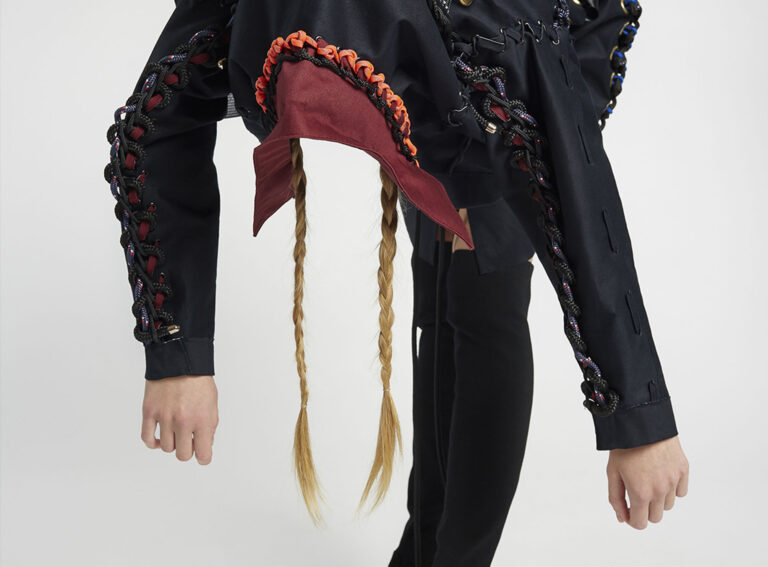 The approach of Czech fashion designer Barbora Procházková has its roots firmly planted in the fertile soil of meaningful co-creation. By creating made-to-measure packages of customizable cut patterns with instructions, her Project SAPIENCE strives to encourage a hands-on and intimate relationship with our garments.
interviewfashion
FAMILY BUSINESS