AT THE END OF THE DAY

Brussels-based painter Louise De Buck currently focuses on portraying strength and mystique through the naked female form. Her heroines, who she claims bear fragments of her own character, express solitude, the fragile states of reciprocated intimacy, and hints of animistic tendencies.
art
FAMILY BUSINESS

ABOUT THE ARTIST / Louise De Buck is based in Brussels at the moment but, as she says, “who knows what the future will look like.” She is a self-described lover of images and musical journeys; curiosity that has always been there since childhood. She continuously explores textures in acrylic and oils paintings. According to Luise, the story she is trying to tell through the paintings has many layers; old-school movies, B-grade movies and simple memories of happy or sad moments of her life. She is passionate about expressing her feminism and visions of injustice women have to face in this world in a idiosyncratic way. What Louise enjoys the most is painting scenes that depict women in all their naked glory and intriguing mysterious beauty. She loves expressing her power and feminism that way, knowing that it is very unconventional.

The impact her friends and family have had on her life is the foundation of her inspiration and, as she claims, also vital for her well-being as an artist and human being. Other sources of inspiration are post-apocalyptic films from the 80s and 90s, and horror and mysterious soundtracks. Furthermore, her travelling adventures help her grow into, in her words, “who I know I’m supposed to be!” The female figures that Louise depicts reflect her personality and image, almost as if her paintings were all self-portraits and intimate moments that, piece by piece, reveal a part of herself. The Addiction series / This series represents a window into a couple’s life, their intimacy seen from the point of view of the other partner, and the bodily addiction to shared sleep. (up in the article)

Tard le Soir / This painting, which is a part of the Privacy series, is a moment of  everyday life suspended in time.  (man smoking – up in the article)

Dogs and a Swimming Pool / This painting represents a surreal vision, like coming out of a dream or a psychedelic illusion.

Party’s Over / A tired woman with runny makeup looking at her empty glass evokes the end of an evening, the moment of hesitation after the euphoria, the descent after the ascent.

Reflexion / This painting, also part of the Privacy series, tries to express this vague atmosphere which one feels when returning from a long restless night outside. When one is alone, facing themselves in the silence of loneliness. 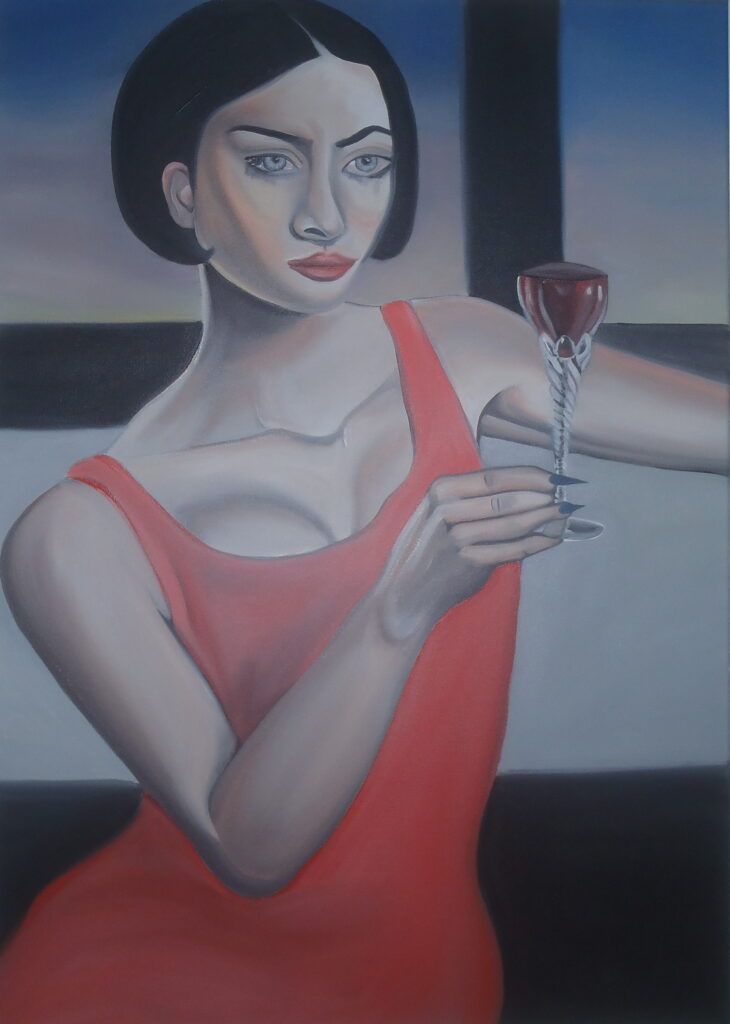 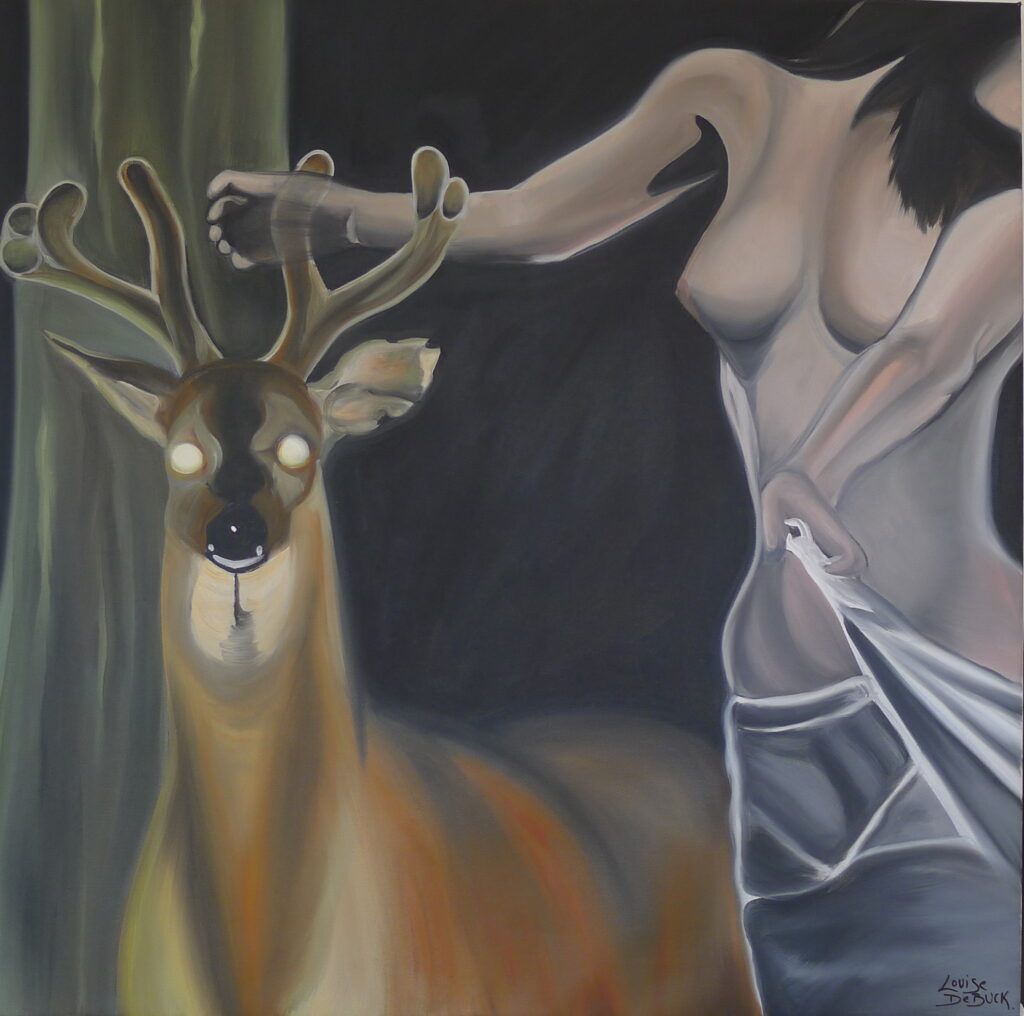 Brussels-based Louise De Buck finds inspiration in intimacy and lack thereof, post-apocalyptic films from the 80s and 90s, and in horror and mysterious soundtracks. These components are evident in De Buck’s works, which often depict female subjects, mostly naked, and with intriguing and mysterious looks. The female figures that Louise De Buck depicts reflect her personality and image, almost as if they were all self-portraits that, piece by piece, reveal something of her essence. 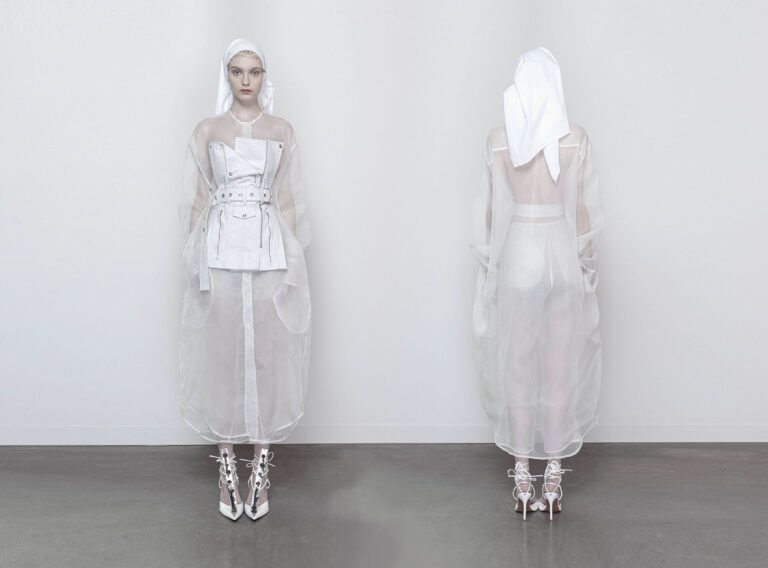 In her collections, Slovenian fashion designer Lucija Kejzar turns to her roots in a retort to contemporary fast fashion: opting for traditional tailoring techniques, textiles and details, she actualizes garments now only found in museums for the 21st century.
interviewfashion
FAMILY BUSINESS
Read more

Plody Erlanu, the new Czech ceramic design studio led by David Střeleček, blurs the line between utility and aesthetics. Having established themselves with their cutting-edge vision brought to reality and now reaping the first fruits of their labor, this is one brand to certainly keep your eye on. Dive into today’s interview to learn about Plody Erlanu’s mission, approach and plans for the future.
interviewdesign
FAMILY BUSINESS
Read more

COAXING THE SHAPE OF MATTER

THE WEIGHT OF DESTINY

Having shifted from a comics book format to a more traditional approach to painting, Niklas Asker has taken to express with his art the mysterious elements of human existence. His masterful pieces touch on religion, spirituality and a sense of longing, and in today’s interview Niklas divulges his method and background that led to his current style.
interviewart
FAMILY BUSINESS