Languages and scripts (written languages) play an important role in forging national identities and turning them into nation states (or vice versa). These imagined communities of people who think, speak, read, and write the same language form closed groups which often stand against one other.

There are many types of alphabets or writing systems for various historical or political reasons. For example in the case of Turkey, type was used as a political tool to incite a civilisational leap and a change in the country’s geopolitical orientation. In the case of Israel, writing and language worked as a social adhesive, which allowed arrivals from various countries to feel a sense of togetherness in their new home. In this case study of Georgia, writing worked as an ancient shield, thanks to which the Georgians maintained their statehood despite constant pressure and turbulence in the region. (1)

(1)  The bitter truth, however, is that after 1991, Georgia lost South Ossetia and part of Abkhazia which both – with support from Russia – gained the status of autonomous territories. Abkhazian is currently written in Cyrillic. This script was first used in 1862, expanded to fifty-five letters in 1909, as Abkhazian uses a number of phonemes impossible to record in common Cyrillic. Between 1928 and 1938, a Roman alphabet composed of seventy-two letters was introduced, developed by linguist Nikolai Marr. After the stabilisation of the Soviet Union, Tbilisi became the centre of the Caucasian republics of the federation, so the Georgian alphabet was also introduced in Abkhazia. After Stalin’s death, however, there were autonomous tendencies that led to the reintroduction of the 1909 Cyrillic. The similar story of South Ossetia, de jure still part of Georgia, shows how unstable territories break along linguistic fault lines.

The Caucasus, a belt of land between the Black and Caspian seas, it is one of the most ethnically and linguistically atomised regions in the world. Historically, this territory is also very unstable, determined by the various affinities to the superpowers which demarcate the region: in the north, Russia (the Soviet Union), in the south, Turkey (the Ottoman Empire) and Iran (Persia).

It was the Soviet Union who meddled most intensely in systems of writing – perhaps of all the governments of the world. Legislative acrobatics were employed constantly as the politics of language and writing of various minority nations transformed, until the entire charade ended in a decision which was politically convenient for Moscow.

The Bolshevik Revolution which ended the rule of the Tsarist monarchy in Russia, opened the doors for the emancipation of ethnic, religious, and linguistic minorities. (2)

(2) During the revolution, these nations used this historical opportunity for national self-determination and established their own states, later fluidly forming larger formations. These states in the Caucasus and Central Asia usually had very short lifespans, terminated very soon after the consolidation of power at the centre – in Moscow. Examples of these states from between 1917 and 1922 include: The North-Caucasus Emirate, the Mountain Republic of the North Caucasus, or the Kars Republic.

During the first years of the Soviet Union, there was still a conviction that the Marxist revolution would spread throughout the entire world. When Leo Trotsky (1879–1940) was still in power, he predicted that Western Europe (with its Latin script) would become the centre of the new Marxist state (Goodman 1956: 91).

After the death of Lenin, who enforced the Romanisation of peripheral territories, the Georgian Joseph Stalin (1878–1953), originally a commissioner for national issues, seized power. Then the global situation changed considerably, and not in the Soviet Union’s favour. The Marxist revolution did not spread west and diplomatic isolation forced Stalin to completely change his strategy, leading Moscow to what we could call “one-country socialism” (Collin 2005). As World War II grew closer, Stalin turned to nationalism, the only movement capable of mobilising such an enormous territory in case of war. Hence, Soviet linguistic engineers began to reinstate Cyrillic, casting aside the new Latin script. The second, no less important reason for this step was the recent establishment of Latin script in Atatürk’s Turkey (1928). Stalin was afraid the Turkic nations of the Soviet Union might grow closer to strong, unified Turkey (Ostler 2010: 200). (3)

March 1938 saw a decree which prescribed the teaching of Russian at all elementary schools, and to write all mother tongues in Cyrillic. Moscow argued that it would be easier for the students to learn a single script. This process of Russification reached its conclusion at the end of the war and Cyrillic became the standard script in the entire Soviet Union except the Baltic states, Armenia, and Georgia, where other alphabets were too firmly ingrained to be easily replaced.

These last two, Armenia and Georgia, are unique examples of small states with a national writing system of their own. Of the fifteen countries that formed the Union of Soviet Socialist Republics, Armenia and Georgia proved the most resistant to Russification. While for most of the ethnicities of the Caucasus, type was a 20th-century invention, Armenian and Georgian already had their own alphabet, established following the example of Greek and dating back to the 5th century AD (Collin 2005). (4) (5)

(4) A new discovery by Georgian archaeologists might prove that Georgian writing has an even longer history (see Burton 2015).

(5) In 2015, UNESCO even added Georgian scripts – Asomtavruli, Nuskhuri, and Mkhedruli – to the intangible cultural heritage list.

The creation of these unique national writing systems is closely tied to the national churches. At the beginning of the 4th century AD, the Kingdom of Armenia became the first nation to adopt Christianity as its official religion. The Georgian Orthodox Church became the official church of Georgia shortly after. The failure of Russification in these two countries can thus mostly be attributed to a historically deeply rooted religion and culture, mediated through a unique writing system. Jewish-Russian poet Osip Mandelstam said of Georgian culture:

“I would consider Georgian culture a type of ornamental culture. Tracing the outlines of the vast and fully developed territory of the foreign (culture), they [the Georgians] mainly absorb only its outer design, while at the same time fiercely resisting the internally hostile essence of the powerful neighbouring territories.” (Karumidze 2014: 75)

The presence of ornament in the Georgian alphabet is undisputed. The entire expressive character of the alphabet is based on distinctive arches above or below the baseline. This character allows for highly visual and expressive work with the script, as attested to by a number of graphic works and book covers from the modernist and futurist periods. (6)

(6) At the beginning of the 20th century, the entire world was obsessed with desire for progress, for destruction of the old and for renewal. These tendencies were reflected in art and culture as indivisible components of the life of society. The creation of an independent Georgian republic based in Tbilisi attracted artists and whole groups of the Russian avant-garde from Moscow. One of the movements to pump through the city was futurism. A path that rejected aged approaches and which wanted to establish a new language of art. Futurist books from 1917–1919 became one of the crucial events in the cultural scene of the Georgian metropolis.

The first written record of this alphabet (whose author and precise date of creation remain unknown) come from the year 430 AD, specifically an inscription in a church in present-day Palestine (Holisky 1996: 367). This inscription, however, has nothing in common with the contemporary form of the civic Georgian alphabet known as Mkhedruli. This inscription was written in a type called Asomtavruli, or “capital letter.” When we speak of the Georgian alphabet, we mean three different forms of writing: Asomtavruli, Nushkuri, and Mkhedruli. The first two are used only rarely, by the Georgian Orthodox Church. Mkhedruli, as mentioned, is the official script of Georgia. It is written from left to write and is composed of thirty-three characters. Mkhedruli indicates stress, but it uses no diacritical marks or capital letters (Holisky 1996: 364). An interesting fact of the Georgian language and its writing is that it does not distinguish genders, and is also read exactly as it is written, which – think of English or French – is certainly not a matter of course. 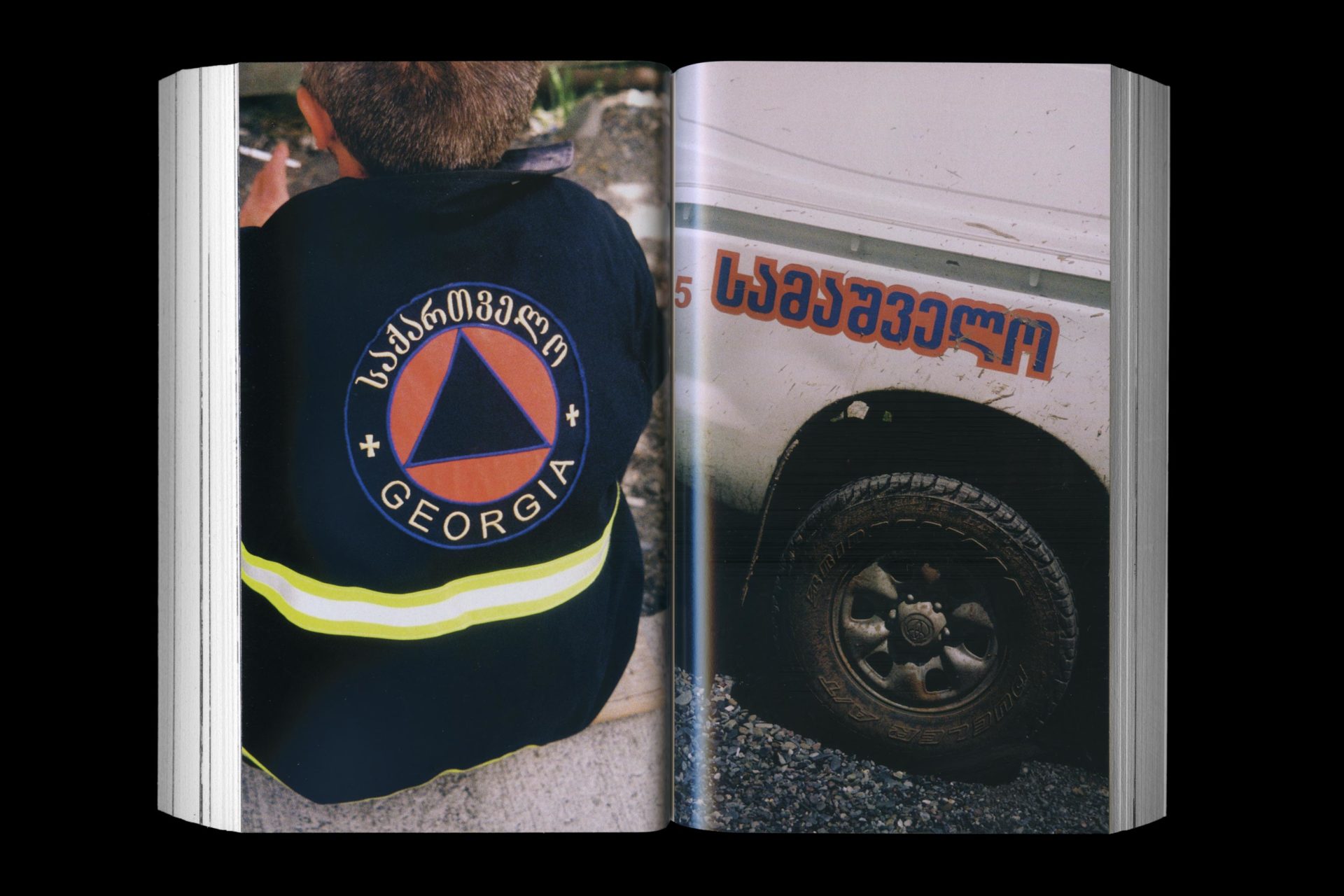 During our visit to Tbilisi, which became the centre of our explorations of the Georgian typographic landscape, we noticed – in addition to bizarre signs saying 24/24, to emphasise that the opening hours truly are all hours, and ubiquitous signs advertising Xerox, Book, and Translation, we noticed one important element that fascinated us throughout the trip. Since 2013, it has become compulsory in the capital city to display all shop signs for international companies in Georgian script as well as the original. Walking through the streets, you can thus observe Georgian mutations of H&M, McDonald’s, Under Armour, Puma, Makita, etc.. The intimately familiar epigraphic of these global brands, through a simple substitution of the shapes we know so well, feels like a surreal alternate reality somewhere in the Caucasus Mountains. What you’ll barely see, however, are signs in Cyrillic script. Although Georgia was indelibly a part of the Soviet Union, the Union could never suppress the historic relationship of the Georgians to their writing system – especially not here, at the very heart of the Georgian nation. Animosity towards Russia was only heightened during the war for South Ossetia in 2008, and type is thus a symbolic (intentional and organic) demonstration of control over one’s own territory, and the viability of Georgia’s national type and its typographic landscape.

The article is taken from National Letters (published by Letter Books, https://www.letter-books.com), an anthology edited by Marek Nedelka. The book travels through the episodes of the past in which letters, languages, and scripts played an important role in creating national states and identities. Through four case studies (Turkey, Israel, Georgia, Ethiopia), the main body of the book explores four languages and nations which were each, against all odds and for various reasons, able to develop and maintain their writing system throughout their entire history, up to the founding of their national state.

Edited and Designed by Marek Nedelka

Co-Published with UMPRUM (Academy of Arts, Architecture & Design in Prague 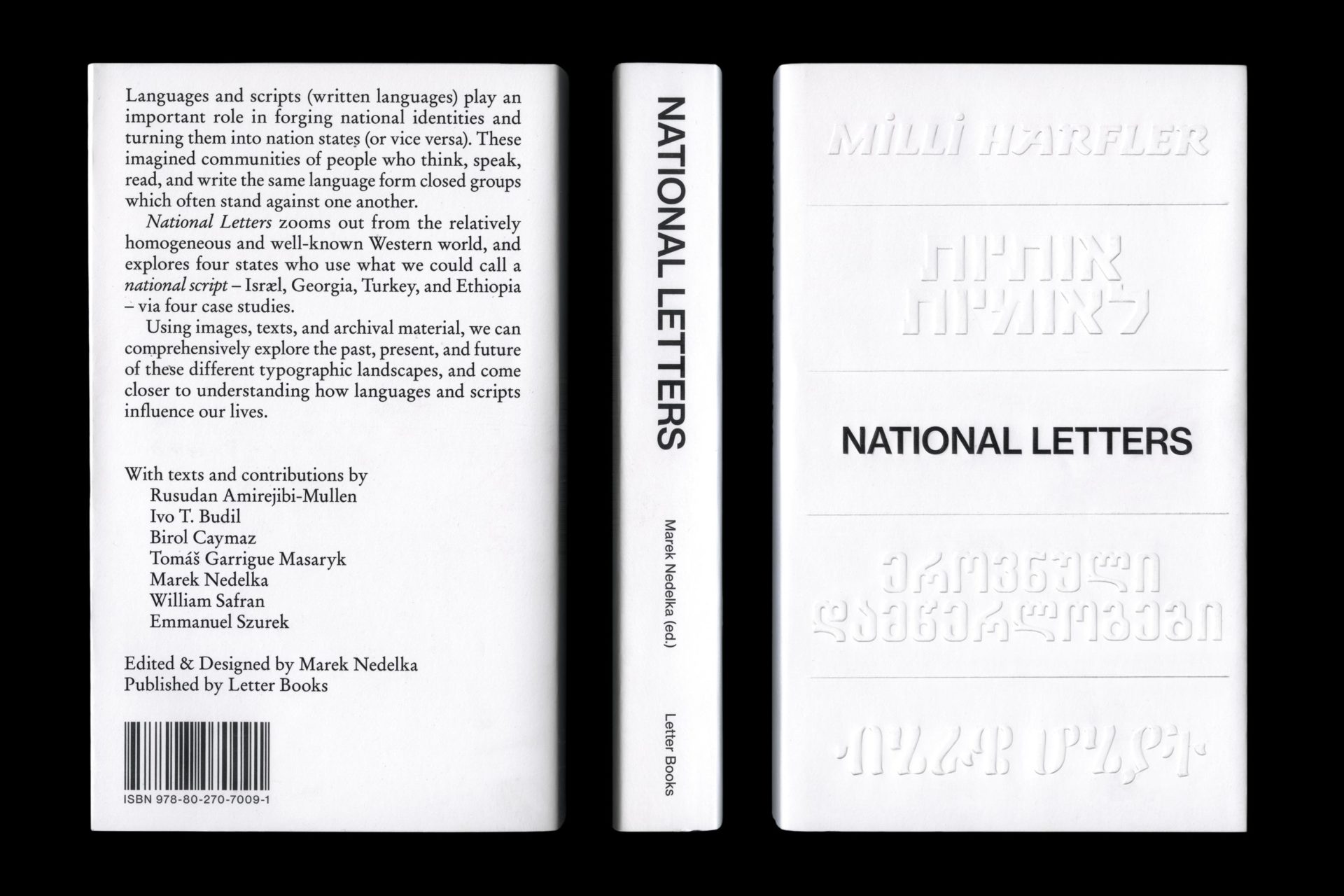 ABOUT / Marek Nedelka (*1992) is a Czech graphic designer. He earned his MA at Academy of Arts, Architecture and Design in Prague (UMPRUM) in Graphic Design and New Media, following a bachelor’s degree in Architecture and Urbanism at the Faculty of Arts and Architecture at the Technical University of Liberec. He works with institutions and individuals mainly within the fields of architecture, design and art. In late 2019, he founded Letter Books, a small publishing house focusing on language, writing systems, typography and getting deeper into the reading of letters from unexpected directions. Marek lives and works in Prague //