Jean-Baptiste Janisset opens our Family Business theme with idiosyncratic sculptural compositions of the divine. The Holy Mothers in mother-of-pearl are dissolved and reimagined into new affects as “there is no more total form, identifiable or assignable, only this infinite swarming of symbols,” as Ingrid Luquet-Gad elucidates in the accompanying texts.
art
FAMILY BUSINESS

For five years, Jean-Baptiste Janisset has been surveying places of worship. In churches and cemeteries, calvaries and sanctuaries, the artist has been cataloging motifs, symbols and glyphs: angels or bats, Virgins with Children or winged skulls, owls or pentacles. His journey, which took him from the south of France to Catalonia via Paris, was undertaken under the auspices of an energetic quest. It is a collection, both erudite and compulsive, but one that, beyond simple taxonomy, opens up a relationship. The body is in the act, engaged by an operation of molding in situ of the fragments; as much as is initiated the interlocution, by a dialogue with the guardians of the spirit of the places – priests, magicians, marabouts or mediums.

From these molds, drawn in plaster, then silicone, and finally transited in lead, the artist realizes syncretic compositions. Often, the elements are acted within informal architectures: in the center of Firmament, the second solo exhibition of the artist at the Alain Gutharc gallery, a vehicle takes possession of the space. However, nothing of its presence makes up a mass nor is it apprehended by a single glance: the surface catches the eye as much as the form is concealed, and in the proliferation of motifs, the eye gets lost in a network of radiating rhythms. There is no more total form, identifiable or assignable, only this infinite swarming of symbols which, while expressing themselves each from an idiom with a lost code, compose together the chords of a cosmic harmony. 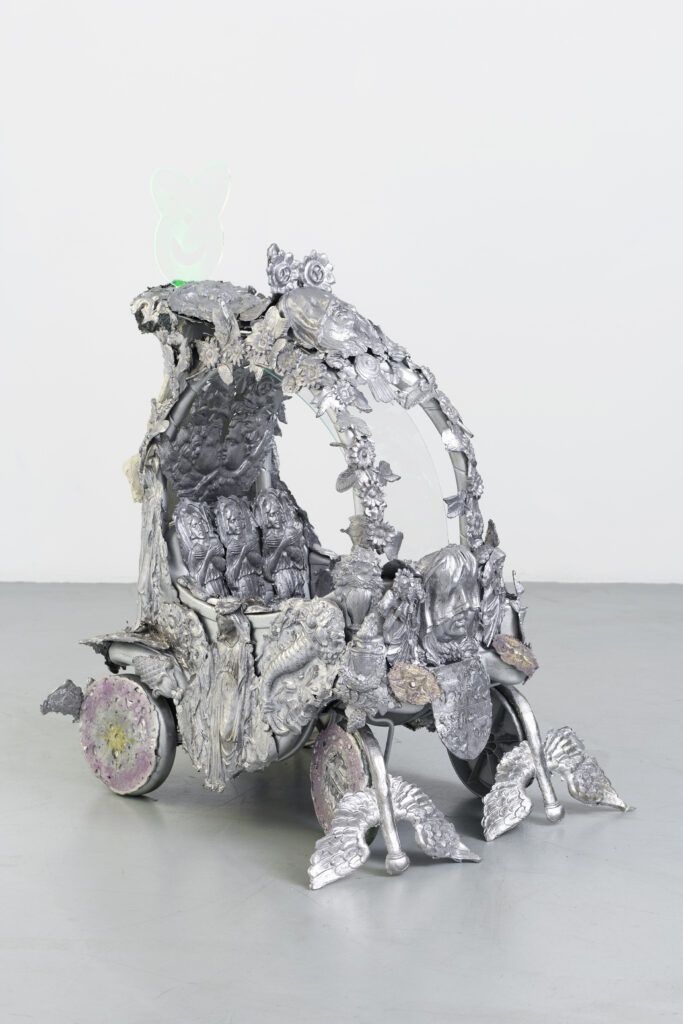 The work in question, Vers l’infini et au-delà, provides a sculptural elevation and indicates the possibility of a journey. Its elements have been juxtaposed to form a membrane that imperfectly envelops a paradoxical structure: a mass-produced children’s carriage purchased on Leboncoin. It is an attempt to manifest, within a post-industrial material culture, something of the incantatory rise of the “murmur of societies” that the historian Michel de Certeau evoked. By placing the interpretation of collective signs under the auspices of a “cultural poaching”, he attributed to each person the fabrication of a symbolic cohesion beyond the established meanings, uses or scripts.

On the walls of the gallery, a series of smaller scale pieces introduce the color obtained through a process of metal alloying. By transferring to the surface of the pieces images of astronomy or fractals gleaned from Google, the artist also merges two systems of belief and representation of the beyond. In a recursive loop, the myth of progress and the religion of scientism, precision optics and geometric objects, join the hundred or so mystical symbols listed by the artist. They represent a variant of it, also located in a relative space-time, the ones and the others linking together in the manner of the hologram which, at the top of the sculpture-vehicle, comes to draw a knot of heart.

One has, in the course of the evolutions of the media and technological infrastructure, wanted to reread the figure of the “poacher” in various ways. Thus, the first book of the media theorist Henry Jenkins refers directly to it: with Textual Poachers, published in 1992, the American analyzes the participative culture of the audience, a first study taken up by Matt Hills who, in Fan Cultures, will introduce the concept of “performative consumption”. For Jean-Baptiste Janisset, meaning is similarly born from a reconfiguration of collective signs – those of the public space, those of the networked infosphere. But rather than sticking to the extended lineage of the poachers, it is here the posture of the artist which, in its turn, is redefined: subjective without being individual, it places itself to the listening of incantatory ascents, such as in interaction with shared beliefs.

The primacy of the representation or the uniqueness of the creation, as much as the iconological grid of reading, current marotte of the anthropological analyses of the image, bow here before a de-sharing of the sensitive. It also invites new conductive alliances between believer and fan, artist and viewer.

Jean-Baptiste Janisset (1990) is a French artist living in Marseille. A graduate of the School of Fine Arts in Nantes, he has already shown his work in Japan, Benin, Germany, Algeria, Danish, England and has participated in Paris in events such as the Prix de la Fondation Emerige or the Salon de Montrouge. He recently exhibited a solo show at Atelier Chiffonnier in Dijon, at Galerie Alain Gutharc (Paris), as part of a group at MRAC Sérignan curated by Charlotte Cosson & Emmanuelle Luciani and was invited to the MoCo Panacée for the exhibition Possédé.e.s. Engaged in a practice of sculpture after molding, he restores the forms thus copied by staging them in environments that give them a sacred aura and metallic reflections.

The Netherlands-based Ukrainian photographer Alex Blanco is a seasoned visual storyteller. Her 2016-2019 project is a utopian rendering of her parents in their home city of Odessa, “where the real overlaps with the surreal and everyone was born to shine”. Holding true to this notion, she created intimate and atmospheric shots that helped her reconnect with her family.
photography
FAMILY BUSINESS
Read more

“[In Georgia,] there are as many contributing factors as hindering circumstances.” In an exclusive interview, fashion designer Aleksandre Akhalkatsishvili uncovers how Georgian sartorial customs influence his clean-cut, sombre arrangements and silhouettes, how does he employ the deconstructivist practice in his creative process, and talks about the feral femme energy he is drawn to.
interviewfashion
FAMILY BUSINESS
Read more

This one goes “right in the feels”. Pardon us but we couldn't help but stick our noses into your FAMILY BUSINESS. And now the consequence of our actions are haunting us all. The article is accompanied by a whimsically plushy animation by illustrator and animator Charlie Spies.
videowords
FAMILY BUSINESS